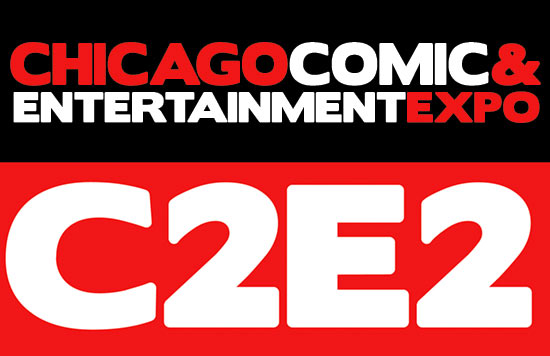 C2E2, Chicago’s Comic-Con and Entertainment Expo, is happening April 25th-27th at McCormick Place. Nerd For A Living is excited to be headed back to the show for the third year! We are particularly excited to be presenting our How to Be a Nerd for a Living panel at C2E2 on Saturday, April 25th.

C2E2 is one of the best pop-culture conventions of the year, and we are honored to be a part of it. If you’ll be at the show, don’t miss the amazing line-up of guest speakers we’ll have sharing advice and anecdotes about how they discovered their career path in nerdy industries. Here’s a breakdown of the panel, as well as information about all of our talented guests:

Do you want to work in a nerd-related industry, but you’re not sure how to break in? This panel of professional Nerds for a Living will share anecdotes and advice about a variety of careers within pop culture industries.

The Chicago Comic & Entertainment Expo – also known as C2E2 – is a convention spanning the latest and greatest from the worlds of comics, movies, television, toys, anime, manga and video games. Bringing the best of popular culture to Downtown Chicago, C2E2’s show floor is packed with hundreds of exhibitors, panels and autograph sessions, and screening rooms featuring sneak peeks at films and television shows months before they hit either the big or small screen. Jill Thompson is a multi-Eisner Award winning illustrator and creator who has worked in comics, stage, film, and television. Jill is known for everything from Sandman to Wonder Woman to Swamp Thing to her own creations – Scary Godmother and Magic Trixie.

Her work is published in the United States by DC Comics, Dark Horse Comics, Marvel and Harper Collins and enjoyed in many languages around the world.

Soon to be a fully articulated fashion doll, The Scary Godmother is available as two lovely graphic novels by Dark Horse Comics, has been seen on stage in Chicago and is a regular Halloween special on Cartoon Network!

Jill is currently finishing up one epic 120 page painted comic, a painted comic miniseries and fulfilling a multitude of handmade Kickstarter rewards as well as designing wrestling gear for WWE Superstar Daniel Bryan. In her spare time she bakes cookies, teaches comic storytelling at The International School of Comics, shoots arrows, throws pottery, travels to other comic conventions and trains for Spartan Races. Barbara (aka Babs) grew up in the sunny and beautiful Charleston, South Carolina. She attended the Maryland Institute College of Art in Baltimore, where she received her BFA in Illustration. She is currently settled west in San Francisco, living the dream working as a full time freelance illustrator.

Babs is co-artist for one of the DC Universe’s most famed heroines, Batgirl. In addition to Batgirl, Babs has worked with clients such as Hasbro, Disney, DC Comics, Boom! Comics, The San Francisco Chronicle, The Boston Globe, and Brand X, amongst others. Her work has also been featured in the Dragonball Z Zine, Crystal Power Zine, Lady Knights, and more. Otis Frampton is a comic book writer/artist, a freelance illustrator and animator. He is the creator of Oddly Normal from Image Comics, and the webcomic/animated series ABCDEFGeek. He is also one of the two artists on the popular animated web series How It Should Have Ended. Barry Crain is a storyboard & concept artist living in Chicago. Barry has worked with such clients as Warner Brothers, Cartoon Network, Disney Television Animation, and more. A storyboard artist on wide range of projects, has Barry worked on Injustice: Gods Among Us, Batman: The Brave & the Bold, Scooby-Doo, The Venture Brothers – and the recently released Mortal Kombat X.

He has also worked as a professional comic artist with Marvel, DC, First Comics, and Tundra, on The Punisher, Earthworm Jim, and Conan The Barbarian, among others. Diana Roberts is an artist with experience in a variety of disciplines. After graduating from California State University Fullerton with a BFA illustration in 2005, she started her creative career as a designer and illustrator for The Jim Henson Company. Once exposed to the endless possibilites of technology in the entertainment industry and beyond, she decided to attend the Gnomon School of Visual Effects, graduating with CG certification in 2011. She has since worked as a digital matte painter and environment artist on films such as Argo and Gangster Squad, as well as a CG pose & layout artist for Sid the Science Kid and Dinosaur Train.

She has recently found ways to make her ridiculous sense of humor come to life through pop-culture parody shirt design, and is currently the Senior Art Coordinator for TeeFury.com.