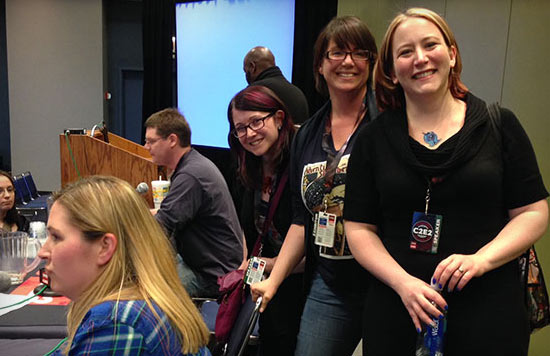 Turning Your Art Into an Online Business: Branding & Marketing for Creators

Moderated by: Wendy Buske of Nerd For A Living

Special thanks to Joey Groah at DIGICO for recording this panel. Janet K. Lee is the award-winning artist and illustrator of Return of the Dapper Men, the Wonderland Alphabet, Marvel Classics: Emma, Marvel Classics: Northanger Abbey, Lost Vegas, and a contributor to Womanthology: Heroic.

Self-taught, she developed her layered art style after her son was born because it was portable and dried before a toddler could get his hands into it. After achieving critical acclaim as a gallery artist, Janet made her first foray into illustration with the Twitter serial, Diary of a Mad Scientist Garden Gnome by New York Times bestselling author Alethea Kontis. She lives in Nashville, Tennessee. Karen Hallion is an artist and illustrator who does licensed work for Marvel, Lucas Arts, Hasbro, and Cartoon Network. Her art can be found on We Love Fine, Etsy, Society 6, and Red Bubble. Her T-shirt designs are also featured on sites like Tee Fury and the Yetee.

Karen is from a small town in Massachusetts just north of Boston called Nahant. She went to Ringling School of Art and Design and graduated with a BFA in Illustration. Up until a few years ago, she was an elementary school art teacher. Now she works full-time as an artist. She currently lives on the north shore of Massachusetts. Andy Schmidt, former Senior Editor at IDW Publishing, former Editor at Marvel Comics, and writer of such comics as 5 Days to Die and Challenger Deep, launched Comics Experience for people who want to make comics, people who want to work in the comics industry, and those who just want to know more about the fantastic medium of comics.

During his nearly six years at Marvel Comics, Andy edited such popular comic books as X-Men, X-Factor, Alias, Secret War, Captain America: The Chosen, Iron Man / Captain America: Casualties of War, Avengers Classic, and the Annihilation saga. As an assistant and associate editor, Andy worked on nearly every major character in the Marvel canon–from Spider-Man to the Avengers and Fantastic Four.

Andy’s “tour of duty” also led him to work with the top writers and artists in the comics industry from Stan Lee to Brian Michael Bendis and from John Romita Jr. to David Finch and Steve McNiven. After leaving Marvel, Andy launched a new career of writing and editing, and founded Comics Experience to pass his knowledge on to students.

Andy was also the Senior Editor at IDW Publishing in charge of such popular franchises as G.I. Joe and Transformers. Additionally, he still found the time to write for Boom Studios, IDW, and others, as well as writing an authoritative, Eagle Award-winning book about making comics: The Insider’s Guide to Creating Comics and Graphic Novels, published by Impact Books. She is a Search Engine Optimization (SEO) Web Consultant for SSM Health Care, and moonlights as the owner of SageLark, a social strategy and copywriting resource.