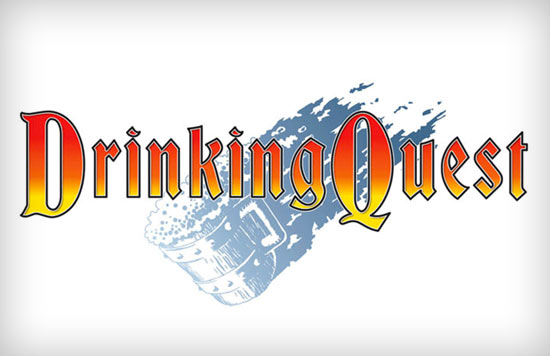 In this episode, we talk with Jason Anarchy, creator of the RPG card game Drinking Quest. Drinking Quest is a social tabletop gaming experience for a bunch of friends looking to partake in adult beverages while smiting monsters and hoarding loot and experience points. You get the fun of Dungeons & Dragons-esque roleplaying in a streamlined, easy to learn and play card game. There’s still some paper, pencils and dice rolling involved, but it’s simple enough for the role-playing newbie to jump right in. It’s designed for responsible drinking, so you can have a good time over several hours without anyone overdoing it. (And, of course, you can play it without the booze if you don’t imbibe.) Jason comes from a business management background and has a serious mind for game development. He created and funded the original Drinking Quest launch on his own, and found immediate interest and success with his product. He has since crowdfunded the production of two more editions, landing the game in stores in several different countries. It’s now his full-time job, and he’s about to release a new Trilogy Edition package, with enhanced versions of all 3 original games plus new bonus material. There’s even a Drinking Quest comic book out now.

Jason’s story really showcases what you can accomplish when you follow through on a good idea, pour yourself into the work and deliver a great, nerdy product to your audience. Drinking Quest works like a typical RPG – you have a character sheet, roll for saving throws, fight monsters and find treasure. But, the stakes are higher, because when your character dies in the game you have to chug your drink in real life, adding a real level of tension and excitement to the battles. Encounters are a series of one-on-one fights to the death. You either kill the monster, earning coins and XP, or your character dies and you must chug. The cards act as the Game Master and the heroes go through four themed quests in each game. The quests get progressively difficult as you advance. However, this is a light RPG and a light drinking game so there is a one chug per quest maximum which prevents Drinking Quest from being a “Pass out in 10 minutes” kind of experience. Over the course of 2 or 3 hours, a typical game averages 2 or 3 chugs.

All three Drinking Quest editions are full games and not expansions. You don’t need one to play the other and you can start with any game. However, they all exist in the same “Drunken Middle Earth” so there is a lot of fun storytelling and humor that carries through the over-arching story. The humor ranges in style from dark, clever, meta, obvious and profound, with many layers that keep the game funny through multiple play-throughs. Whoever gets the most XP wins! Whoever loses had to chug the most – so it’s sort of like everybody wins. 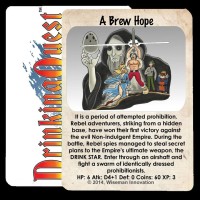 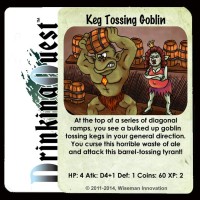 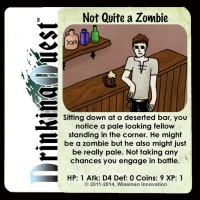 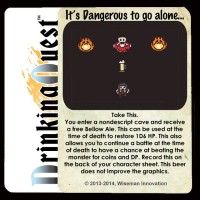 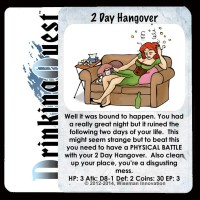