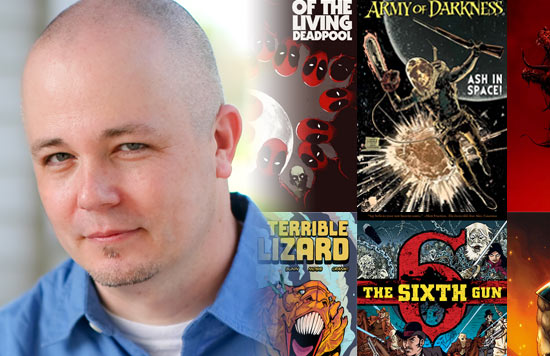 Cullen appeared on the comic’s scene in 2007 with The Damned, later debuting the acclaimed Sixth Gun series, both with artist Brian Hurtt for Oni Press. He soon became a go-to writer for Marvel Comics, with popular runs on Spider-Man, Wolverine, Venom, Fearless Defenders, and Magneto. He’s perhaps most associated with Marvel’s Deadpool character and books. Cullen has also produced books for DC Comics and IDW Publishing, as well as several other creator-owned properties via Oni Press.

We talked with Cullen about the process of breaking into the world of comics via the independent press, working to establish his personal brand and fan-base via personal appearances and social media, and how he maintains a prolific production schedule. And we make sure to cover his time as the “World’s Youngest Hypnotist”.