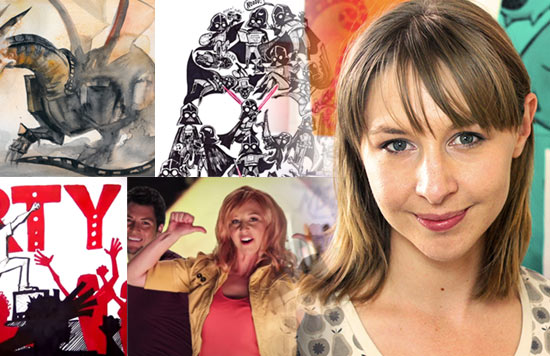 On this week’s show, Wendy and Adron have a delightful discussion with artist and YouTube breakout star Mary Doodles.

You may have seen Mary’s gorgeous, hypnotic, and often hilarious time-lapse paintings and drawings on her YouTube channel. She also produces art tutorials in her “How to Art” videos. Her artwork and engagingly whimsical personality have earned her main YouTube channel almost 247,000 subscribers. She also has a secondary channel, “More Mary Doodles”, which hosts her video blogs about art and entertainment, with amusing commentary and silliness and the occasional short film. That channel has almost 27,000 subscribers of its own. Cranking out weekly video content for a rabid fan-base is a full time job, but Mary also performs as part of the improv troop The Cobranauts and a number of other shows in Los Angeles.

Before bringing her art to the internet, she worked in production for movies and TV shows, including LOST and Forgetting Sarah Marshall. Later she’d win a 2012 Streamy Award for her costume and prop work on the massively successful YouTube series Epic Rap Battles of History. And she was just recently featured in the Epic Rap Battle between the Ghostbusters and the Mythbusters. She played former Mythbuster Kari Bryon in a video that’s been viewed more than 14 million times.

Mary was every bit as hilarious and enjoyable to talk to as you’d expect from her videos. And her story is a great example of how to follow your skills and take advantage of opportunities so you can do the work you really love.