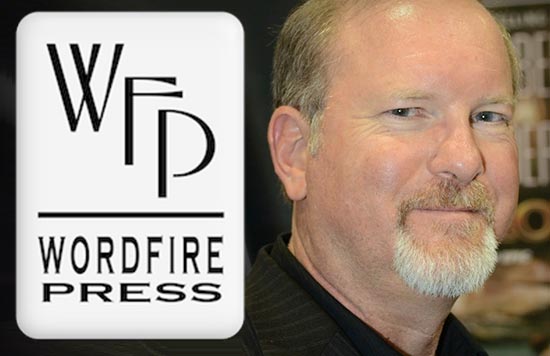 Back in March, Nerd For A Living made the trek to Seattle for the massive Emerald City Comic-Con. While we were there, we got to hang out with the WordFire Press group.

Everyone at WordFire was funny, engaging and generous with their time. Fans of science fiction and fantasy will definitely want to check it out, as will anyone interested in the working life of writers. Kevin J. Anderson has published 125 books, more than fifty of which have been national or international bestsellers. He has written numerous novels in the Star Wars, X-Files, and Dune universes, as well as a unique steampunk fantasy novel, Clockwork Angels, based on the concept album by the legendary rock group Rush. His original works include the Saga of Seven Suns series, the Terra Incognita fantasy trilogy, the Saga of Shadows trilogy, and his humorous horror series featuring Dan Shamble, Zombie PI. He has edited numerous anthologies, including the Five by Five and Blood Lite series. Anderson and his wife Rebecca Moesta are the publishers of WordFire Press.

Peter J. Wacks has always been amazed and fascinated by both writing and the world in general, and has worked in everything from waiting tables to private detection. Throughout the course of his life, he has hitchhiked across the States and backpacked across Europe on the Eurail. He likes reading, watching movies, playing video games, and playing tabletop games. He also studies martial arts and philosophy.

Peter has acted (Revenge of the Nerds and others), designed (and written storylines for) games (the bestselling Cyberpunk CCG), written novels and other spec fiction (like Second Paradigm, which landed him a guest speaker gig with local Mensa on writing true nonlinear concepts), and even gotten nominated for a Bram Stoker Award for his first graphic novel, Behind These Eyes (co-written with Guy Anthony De Marco.) Currently, he is managing editor of WordFire Press and is working on his next 3 novels with Steven L. Sears. R.J. Terrell became an instant lover of fantasy the day he opened R. A. Salvatore’s The Crystal Shard. Years (and many devoured books) later he decided to put pen to paper for his first novel. After a bout with aching carpals, he decided to try the keyboard instead, and the words began to flow. He’s released five novels so far across three different series – Hunter’s Moon, Legend of Takashaniel and Saga of Ruination.

RJ’s also a working actor who has appeared on the television shows Supernatural, Arrow, and recently iZombie.

When not writing or acting, he enjoys reading, video games, and long walks with his wife around Stanley Park in Vancouver, BC.

Alexi “Lex” Vandenberg is the event & booking manager for WordFire Press and the Geek in Charge of Rabid Fanboy Marketing. He started his long affiliation with fandom when he was give the Lord of the Rings Trilogy, Han Solo at Star’s End, and was allowed to stay up to watch all night Star Trek Marathons at the age of nine. However, his parents gave him the name of a notorious super-villain; what other result could they have possibly expected? He involved himself in comics, role-playing games, sci-fi, fantasy, theatre, and conventions. He also discovered a talent for marketing and planning; gifts that eventually allowed him to serve on the staff of TachyCon, Florida’s largest sci-fi convention as director of gaming and communications.

Lex later served for over a decade as Executive Vice President of Hess Political Strategies, using his marketing and communications expertise in helping candidates fundraise and develop their campaigns. Upon recovering his sanity, Lex used these same techniques to develop the brands for the Boys & Girls Clubs, then served as the Executive Director of the Dr. Theodore A. Atlas Foundation where he organized Hurricane Sandy Relief efforts for New Jersey, New York and New England and organized the Teddy Hurricane Sandy Relief Dinner which featured celebrities from popular TV shows and movies.

Lex, in his private time, is committed to all things geek. The question of Kirk vs. Picard is a moot one to him (the answer is The Sisko). He also feels that it is false to say that “Han shot first,” since it implies that Greedo shot at all. He is devoted to the great love of his life Mary Elizabeth, his daughter Madeline, and his family that taught him to explore the world in its infinite variety.