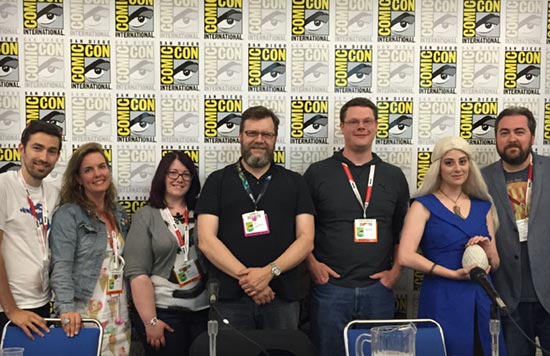 We just returned from the joyous madness of San Diego Comic-Con. For us, SDCC produced a number of personal and professional highlights. Perhaps our favorite part of the show, though, was our “How to be a Nerd for a Living” panel on Saturday, July 11th. We assembled six of our favorite podcast guests to discuss their careers and how they came to be “nerds for a living”. The result is an informative, entertaining conversation with a group of accomplished, driven professionals that should motivate and inspire any career nerd.

How to be a Nerd for a Living: Careers in Nerd Culture – Recorded Live at San Diego Comic-Con

Many people dream of working in pop-culture entertainment related industries, but most are not sure of how, where, or when to start.

Our guests offer actionable, realistic career advice and personal anecdotes that may provide the advantage needed for those trying to “break in”. Topics include education/training, resources and communities, networking, industry “realities” (i.e. time commitment, job relocation, etc.), and tactics to use or avoid when seeking out a job in your dream industry.

Moderated by N4AL’s Wendy Buske, the panel concludes with a short audience Q&A session. (Please note that the panel room didn’t have mics for the attendees with questions. We weren’t able to capture audio of their questions, but you can hear the panelists’ responses. The context of the questions should become clear in the discussion.)

Many thanks to Andy, Sarah, Hal, Zach, Lee, and Kristin for participating and giving our SDCC audience a great panel experience!

Every time you make a mistake, say "How fascinating!" #N4AL #SDCC Listen to the N4AL Podcast interview with Kristen. Listen to the N4AL Podcast interview with Lee. Listen to the N4AL Podcast interview with Zach. Listen to the N4AL Podcast interview with Hal. Listen to the N4AL Podcast interview with Sarah. Listen to the N4AL Podcast interview with Andy.