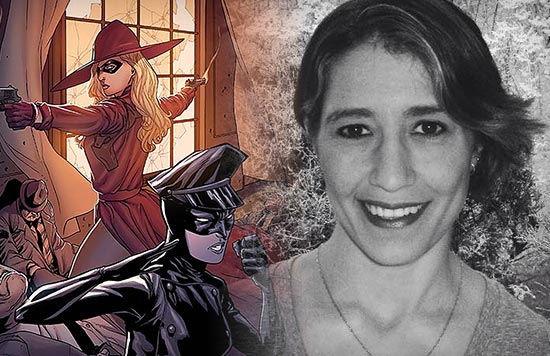 In this podcast episode, Wendy and Adron chat with comic book writer Erica Schultz. She is currently one of the writers on Dynamite Entertainment’s massive crossover series, Swords of Sorrow. She also lettered every issue in that series.

Over at Marvel Comics, she co-wrote Revenge: The Secret Origin of Emily Thorne, a tie-in book for NBC’s television series Revenge. And she was recently featured in Vertigo Quarterly: SFX from DC Comics.

Erica Schultz is also the co-creator of the indie crime thriller M3, comedy adventure The Unauthorized Biography of Winston Churchill: A Documentary, and comedic romance Cheese: A Love Story, all from Vice Press. Se is a co-editor on RISE: Comics Against Bullying Anthology from Northwest Press.

Erica moonlights as an animator, including work on the motion comic adaption of Marvel’s Astonishing X-Men (the “Gifted” arch). Her career also included a long stint in the advertising agency world.

We discuss how all those various roles led into her current work in comics, what it’s like writing for established intellectual properties, the life of an independent writer working the convention circuit, and much more.