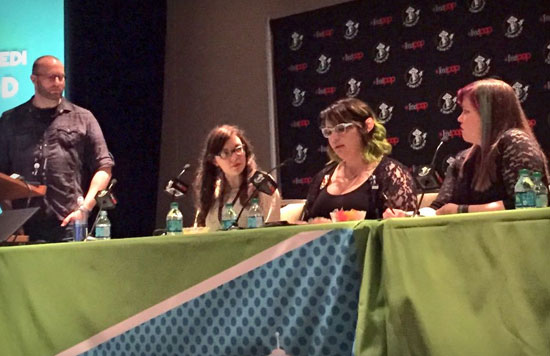 Marketing Isn’t Magic: Promoting Your Art Without Selling Your Soul

This episode was recorded in April 2016 at Emerald City Comicon in Seattle, Washington. We presented our Marketing Isn’t Magic panel to talk about how to promote your art without selling your soul. The discussion is focused on creative and practical advice for promoting your small business or other creative endeavors, but we also delve into the professional backgrounds of all of our guests.

We enlisted a top notch group of speakers for the panel, including Jaimie Cordero, the CEO and Glitter Jedi of nerd makeup company Espionage Cosmetics; Danielle Davis, the founder of LadyKiller Marketing & PR; and Jen Vaughn, a marketing professional who has worked with a number of notable comic book publishers. She’s also a comic book creator, and is currently a colorist on the new Archie comic series.

Nerd For A Living podcast host Adron Buske moderated the panel, and he had a ridiculous amount of fun talking with these smart, savvy, hilarious ladies. The room was packed with a great, responsive crowd, and the panel concludes with an insightful Q&A session from the audience.

On approaching personalities and press, who are a few levels above you/your business:

On your social media brand:

On getting attention from editors, companies, and business contacts:

Jaimie Cordero is the CEO / Artistic Director of Espionage Cosmetics, an all nerd, woman-owned business based in Tacoma, Washington, creating make-up for nerds, by nerds. Founded in 2011, the company has seen enormous growth in the niche nerd market. Espionage Cosmetics has expanded from a living-room operation to a Tacoma-based studio space with 8 full-time employees, several part-timers and an army of interns. Bi-monthly product launches and fully produced ad campaigns pour out of the studio manned by a full-time wardrobe master/cosplay expert, an interns and conventions coordinator, and Jaimie. Her business card says Glitter Jedi.

Espionage has recently opened their own physical storefront, The Geek Boutique in Tacoma, and the bi-monthly subscription box service, Boom!Box.

Listen to the Nerd For A Living interview with Jamie Cordero & Espionage Cosmetics. Danielle Davis is the founder and chief Casbah rocker of LadyKiller, a marketing, PR, and event company in Seattle, WA. Danielle is a marketer, publicist and entrepreneur with a career spanning gaming, tech, pop culture, comics, music, and Hollywood. She has a particular focus on comic-cons and gaming conventions. She founded Ladykiller in summer of 2013, to design and execute transmedia marketing campaigns as well as producing live events to promote and represent a wide variety of brands and talent. Ladykiller’s clients and partners include The Thrilling Adventure Hour, Nerdist Industries, Tom DeLonge (Blink 182, Angels & Airwaves), Marvel, Oni Press, LootCreate, NerdHQ, Wacom, and Welcome to Night Vale.

Along with business partner Jeremy Morris, Danielle is the co-founder of I Heart Comic Art, an annual benefit event in Seattle’s Capital Hill, dedicated to promoting and encouraging local indie comic artists and providing artist grants. She also serves as a juror for Indiecade: the International Festival of Independent Games.

Through Ladykiller, Danielle leads a team of marketing and event specialists. She travels all over the country – and sometimes outside of it – with her clients.

Listen to the Nerd For A Living interview with Danielle. By the glow of the moonlight, she is on the coloring team for the new sexy Archie, a cartoonist of the Cartozia Tales anthology and recently finished a travelogue for ComiXology and Mental Floss about French convention called Angouleme called JENLAGGED. She’s currently working on a one-shot by Ryan K. Lindsay.

Ask her any questions about going to the Center for Cartoon Studies or living in Vermont under Bernie Sanders’ reign.