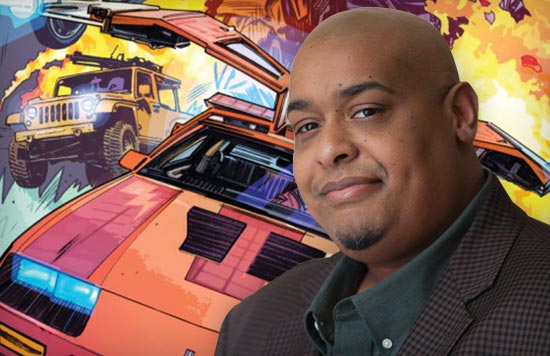 In this episode, Adron talks with award-winning writer Brandon Easton. Brandon was recently a staff writer on the second season of Marvel’s Agent Carter on ABC, credited with writing the episode “Monsters”. He’s also written for animated shows like the reimagined 2012 Thundercats series, and Transformers: Rescue Bots. He wrote the critic-darling biographical comic Andre The Giant: Closer To Heaven for IDW and Lion Forge Comics, and IDW just released his Transformers: Deviations one-shot, that plays “what if?” with the story from the classic 1985 animated movie.

IDW also recently announced that Brandon will be the writer on their upcoming M.A.S.K. series, rebooting the beloved Hasbro 1980s toy and cartoon franchise, and updating it for the 21st century.

We cover all that and a lot more in this discussion, exploring Brandon’s journey from school teacher to professional screenwriter, navigating the turbulent world of Hollywood staffing season, and working on life-long beloved properties.

Brandon M. Easton is a professional writer, screenwriter, and educator based in Los Angeles, CA. Born and raised in Baltimore, MD, Easton is a graduate of Ithaca College where he earned a B.A. in Sociology, Boston University where he earned an M.F.A in Screenwriting and Lehman College where he earned a Masters of Education in History. After teaching U.S. History and Economics in the Bronx and Harlem, New York for six years, he decided to go for his screenwriting dreams in Hollywood and scored a gig on Warner Bros. new ThunderCats TV series and Hasbro’s new show Transformers: Rescue Bots.

Years before making the move to LA, Brandon achieved another one of his life goals: becoming a graphic novel creator. His published work includes Arkanium and Transformers: Armada for Dreamwave Productions, Shadowlaw, released in January 2012 to an immediate sell-out from Arcana/Platinum Studios for which he won the 2012 Glyph Award for Best Writer; Miles Away, a teen superhero series from Antarctic Press, and multiple titles for Lion Forge Comics, including a highly-anticipated Andre the Giant graphic novel biography.

With several acclaimed works under his belt, Brandon was named the new writer of the international graphic novel franchise Armarauders and was a guest writer for New Paradigm Studios’ Watson and Holmes (a reinterpretation of the Holmes mythos set in modern Harlem, NY) comic series for which he received a 2014 Eisner Award nomination for Best Single Issue or One Shot for issue #6. The Eisner Award is considered to be the “Academy Award” of the comic book industry. His work on Watson and Holmes also netted several Glyph Award wins including Story of the Year, Best Writer and the Fan Award.

In 2014, Brandon produced, directed and wrote the documentary Brave New Souls: Black Sci-Fi and Fantasy Writers of the 21st Century that highlights the inspirations, struggles and creations of a new crop of African-American speculative fiction scribes. Brave New Souls was screened at Eagle Con at Cal State LA, Stan Lee’s Comikaze Expo and is slated for multiple festivals and comic cons across the U.S. in the near future. Brandon regularly incorporates his life experience and knowledge of social science into his projects; delivering potent dramatic sequences built from the intersection of race, class and gender.

Brandon was recently announced as one of the eight finalists in the 2015 Disney/ABC Studios Writing Program after being chosen from a pool of over 1500 applicants.

Brandon is committed to telling stories across many media platforms that explore the depth of human diversity within our interconnected global society.