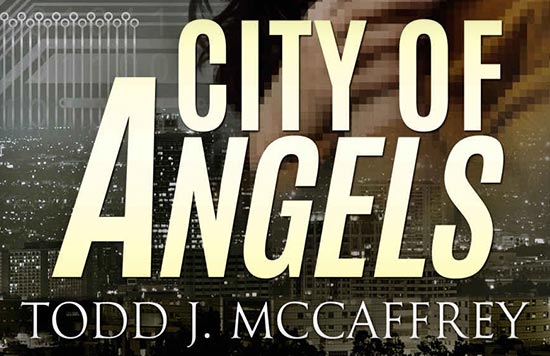 A couple of weeks ago, at Kansas City’s Planet Comicon, Adron had the chance to sit down and chat with author Todd McCaffrey. If that last name seems familiar, it’s for good reason. Todd is the son of science fiction and fantasy legend Anne McCaffrey, the best-selling author of the Dragonriders of Pern novels. Before she passed away in 2011, Anne collaborated with Todd on several Pern novels, and he has carried on with the series with his mother’s blessing.

We’re also joined in this conversation by City of Angels editor Bryan Thomas Schmidt, who also happened to be an editor on the breakout Andy Weir novel The Martian, which spawned the hit Matt Damon film of the same name.

We recorded this interview in the Planet Comicon guest hospitality room, just off the con floor. It was a pretty noisy space, but we think you can follow the conversation without a lot of trouble. We discuss Todd’s new book, working with his mother and taking over the Pern legacy, and the many iterations a book takes before it finally lands at a publisher.

One of the oft repeated cliches of writing tips is the phrase “Write what you know.” In countless workshops instructors often touch back on the theme of pulling from one’s experiences to bring a story to life. If we believe in the wisdom of the advice dished out by so many experts, then Todd McCaffrey has an embarrassing abundance of riches upon which to draw.

Never one to be hampered by the need to color inside the lines, Todd’s path has often been filled with interesting side trips. Therefore, it is no surprise that his writing reflects the bold splashes of color that have combined to create the history of an author with a very promising future.

Born to Anne McCaffrey on April 27th, 1956, the then named Todd Johnson came into the world as a rather precocious middle child. Anyone who questions the precocious part has only to read some of the anecdotes in “Dragonholder” to have any doubt removed. He spent most of his childhood on the East Coast of the USA until moving to Dublin, Ireland with his mother and sister in 1970.

Like most of the boys growing up in the ’60s, Todd became space mad. However, unlike most of the other young men running around their yards in pretend helmets and throwing toy rockets into the air, he was given a “complete” set of the actual Lunar Module Pilot Study Guides in 1968. The number of hours spent devouring them repeatedly from cover to cover is evident in the fact that he has been known to quote excerpts from them during convention panels.

When the time came for him to pursue higher education, Todd attended Lehigh University in Bethlehem, PA for a year — and hated it. But he did discover one of the great loves of his life while he was there, computers.

He then proceeded to flunk out of college in Ireland, which led to him joining the US Army in 1978 as an armored Reconnaissance Specialist (Scout). He realized he’d made a mistake later that same year. He was stationed in Stuttgart, Germany from 1978-1982 with the 1st Infantry Division (Fwd) when a combat life expectancy measured in minutes. His time in the military afforded him the opportunity to turn down Officer Candidate School in 1981 as well as being awarded the US Army Commendation Medal, Good Conduct Medal and other minor jewels.

Upon leaving the US Army, he returned to college and graduated with Honors — or rather, “Honours” — in 1985 from Trinity College, Dublin.

Having never lost his love for space, he left Ireland for Los Angeles, California in the hopes of working in the aerospace industry. However, the computers got him first, and he began working in computer programming in 1986. He continued to develop his love of space and all mechanical things that fly by getting a private pilot’s license in 1988. One interesting side note is the collapse of the aerospace industry in 1989.

During this time, Todd’s interest in writing also took flight. The sale of some of his early short stories helped him log an impressive amount of air time. He flew across the continent solo in 1989, attending Oshkosh along the way. After quitting his day job in 1990 to write full time, he repeated his solo cross-continent flight and attended the 1990 Oshkosh as well.

An accomplished writer who draws more fans to him every year through both his self-depreciating wit at conventions and the vibrant characters who live in his writing, Todd McCaffrey is definitely a rising star worth watching.