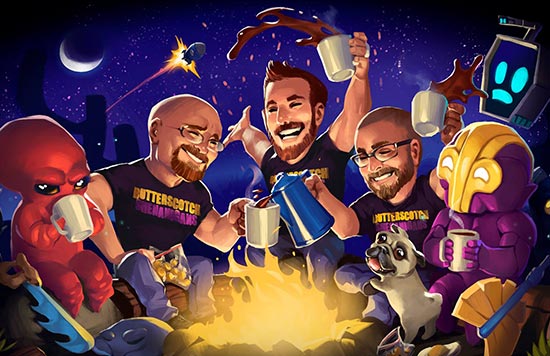 In this episode of the Nerd For A Living Podcast, Wendy and Adron talk with Seth Coster and Sam Coster, two-thirds of the Coster brother alliance behind independent game studio Butterscotch Shenanigans. Together with their brother Adam Coster, they created the hit platform-crossover game, Crashlands. Crashlands is an outlandish, story-driven action-adventure set in a world of hidden magic and high technology. The game combines classic RPG elements with crafting mechanics, experienced with vibrant, whimsical characters and a distinct sense of humor.

Available on both desktop and mobile devices, Crashlands took iTunes, Steam, and Google Play by storm, with great reviews and instant popularity.

We talk with Seth and Sam about the two-year development cycle for Crashlands, a project they estimated early on would only take them a few months. We discuss how their studio came together, and all the ways their college educations did not put them on the path to careers in video games. Butterscotch Shenanigans is a fiercely independent, critically acclaimed game studio founded by three brothers (Seth Coster, Sam Coster, and Adam Coster) located in St. Louis, MO. They make sass-filled games that will soak your brain in pure entertainment. Their core game portfolio (Crashlands, Quadropus Rampage, Towelfight 2, Flop Rocket, and Roid Rage) spans the mobile and PC markets using their BscotchID system, which allows for cross-platform play and cross-game content unlocks. Crashlands, our most recent title, currently stands as one of Metacritic’s Most Critically Acclaimed games of all time on the App Store.

The Coster brothers (Seth Coster, Sam Coster, and Adam Coster) founded Butterscotch Shenanigans in 2012. They are multidisciplinary hackers with diverse backgrounds and skill sets, who all took totally different paths to becoming game developers. Until the launch of Crashlands in January 2016, the brothers collectively ran and were the entirety of Butterscotch Shenanigans. After those years of struggle, the Butterscotch family has begun to grow! (See jobs.bscotch.net for career postings.)