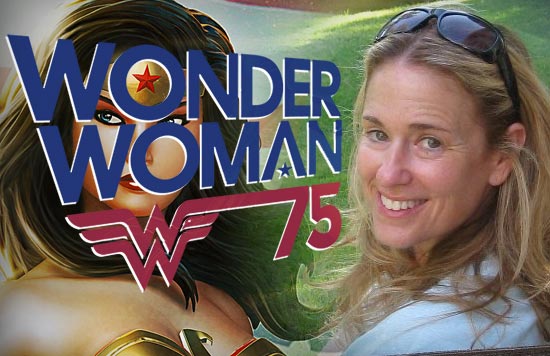 This is our 75th episode of the Nerd For A Living Podcast! And, this year marks the 75th anniversary of the first appearance of Wonder Woman. So, who could be a more appropriate guest than the voice of Wonder Woman, the lovely and talented Susan Eisenberg?

Susan Eisenberg is the voice actor best known for her portrayal of Wonder Woman. She’s been playing the legendary heroine for 16 years in TV cartoons, direct-to-video animated movies, and video games. Wonder Woman first appeared in comics in 1941. She is one of the most iconic heroines of all time. DC Comics and Warner Brothers are currently celebrating 75 years of Wonder Woman. The series later evolved into Justice League Unlimited, which expanded the roster of heroes and villains. The original seven heroes remained at its core, though. After Justice League Unlimited ended in 2006, Susan continued on as Wonder Woman in the animated films Superman/Batman: Apocalypse and Justice League: Doom. Then she carried the Golden Lasso on into the world of video games, voicing Princess Diana in DC Universe Online and Injustice: Gods Among Us. Susan’s credits stretch far beyond the DC Universe, though. She played Viper in the Jackie Chan Adventures animated series. Her video game appearances are numerous, including roles in Destiny, Skyrim, Star Wars: The Force Unleashed, Mass Effect 3, and Skylanders. And she’s been the voice of nationwide ad campaigns for major brands.

We talk with Susan about portraying an iconic character, the differences voice acting in cartoons versus video games, and interacting with fans online and at conventions.