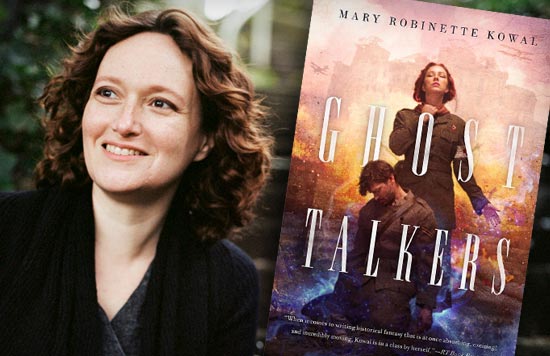 Hugo-award-winning writer Mary Robinette Kowal joins us for this episode of Nerd For A Living. We first met Mary at this year’s San Diego Comic-Con. She spoke on our “Death and the High Cost of Resurrection” panel. Mary’s excellent contributions to that panel discussion made us very excited to get her on the podcast! Her latest book, Ghost Talkers, debuted on August 16th from TOR Books. You can purchase it now in hardcover and eBook formats from Amazon and Barnes & Noble.

A historical fantasy set in Europe during World War I, Ghost Talkers follows an American heiress named Ginger, a medium working with the British army as part of their “Spirit Corps”. Every soldier heading to the front for combat is specially conditioned so that, should they die, their souls report first to the mediums of the Spirit Corp, before passing out of this world. This allows them to share instant information about enemy threats with military intelligence.

Ginger is engaged to a British intelligence officer. But while he is away at the front, she discovers the presence of a traitor. Without her fiancé to validate her findings to the top brass, her reports are dismissed. And things get worse as it becomes clear that the Spirit Corps are being directly targeted by the German war effort.

Nerd For A Living Podcast host Adron Buske read Ghost Talkers and loved it. Mary possesses terrific skill with pacing, dialogue, and world-building. The novel enthralls right from the first chapter, which introduces the Spirit Corp and the reports from dead soldiers. It’s a well executed, intriguing concept. The story also explores the roles and experiences of women during World War I, including many often overlooked by traditional media.

Mary and Adron discuss the inspiration and research that went into the creation of Ghost Talkers. They also explore the other facets of her career: her award-winning work as a puppeteer, and her side-gig as a voice over artist, reading for audio books. Hugo-award winning author, Mary Robinette Kowal is a novelist and professional puppeteer. Her debut novel Shades of Milk and Honey (Tor 2010) was nominated for the 2010 Nebula Award for Best Novel. In 2008 she won the Campbell Award for Best New Writer, while three of her short fiction works have been nominated for the Hugo Award: “Evil Robot Monkey” in 2009 and “For Want of a Nail” in 2011, which won the Hugo for short story that year. Her stories have appeared in Strange Horizons, Asimov’s, and several Year’s Best anthologies, as well as in her collection Scenting the Dark and Other Stories from Subterranean Press.

Kowal is also an award-winning puppeteer. With over twenty years of experience, she has performed for LazyTown (CBS), the Center for Puppetry Arts, Jim Henson Pictures and founded Other Hand Productions. Her designs have garnered two UNIMA-USA Citations of Excellence, the highest award an American puppeteer can achieve.

When she isn’t writing or puppeteering, Kowal brings her speech and theater background to her work as a voice actor. As the voice behind several audio books and short stories, she has recorded fiction for authors such as Kage Baker, Cory Doctorow and John Scalzi.

Mary lives in Chicago with her husband Rob and over a dozen manual typewriters. Sometimes she even writes on them.