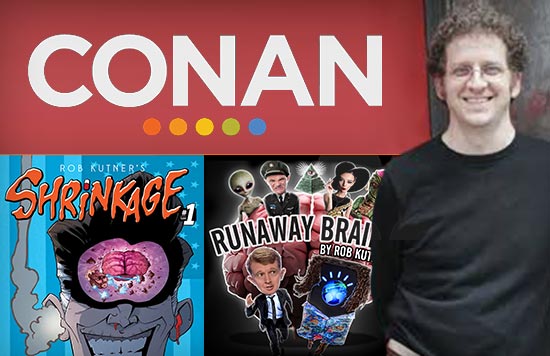 In this episode, we have a really fun chat with comedy writer Rob Kutner. Rob’s television career began on Dennis Miller Live. He then wrote for The Daily Show with Jon Stewart, as part of a comedy writing team that won five Primetime Emmys during his tenure. Rob then transitioned to the short-lived The Tonight Show with Conan O’Brien. He carried over with the monologue writing staff as TBS resurrected the show into its current incarnation, CONAN, where he’s been since 2010.

Rob is the author of the satirical end-of-times bestseller Apocalypse How: Turn the End Times into the Best of Times! He also wrote The Future According to Me, which was a bestselling eBook on Amazon. It’s a madcap comedic romp with some big time stars in the cast, including “Weird Al” Yankovic, Mayim Bialik, Michael Ian Black, Dave Koechner, and Ken Jennings (the man known for being one of the most successful game show contestants of all time).

“Weird Al” plays Watson, the Jeopardy-winning supercomputer who must go on the lam with his rival Ken Jennings after becoming entangled in a shadowy world of hackers, Freemasons, TED talks, alien conspiracy theories, the Dark Web, and the International Gay Jewish Lizard Conspiracy. Runaway Brains is a series of 10 bite-sized episodes, all available now at Howl.fm.

Rob has also partnered with Farrago Comics to produce the original series, Shrinkage, illustrated by John Lucas. In Shrinkage, aliens have arrived – but not in giant motherships, but instead as nano-scale, radiation hungry brain invaders. The series follows the uber-patriot General Sturge McCrain and brilliant, embittered brain scientist Doctor Lana Percy as they are miniaturized and injected into the cranium of President Dullard. There they must destroy the invasive aliens, while battling the president’s own immune system, before the addled world leader turns the planet into an irradiated buffet for the aliens.

Farrago Comics is a new free-to-read, ad-supported comics app, available now on Apple and Android devices. They have publisher back catalogs from IDW and Valiant, plus other indie pubs and creators. Shrinkage is the first original series created specifically for the service. You can get it all free now at FarragoComics.com.

Adron talks with Rob about his career writing for TV, and how he broke into the late-night comedy business. They also discuss branching out into different media, exploring new distribution models, and how he attracted big names to indie projects.