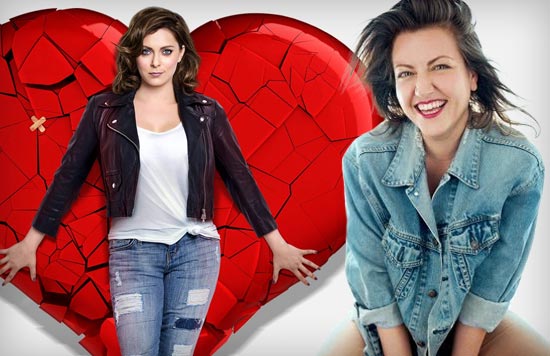 In this episode, Wendy and Adron talk with Emmy-winning choreographer and comedienne Kathryn Burns. If you love comedy and music, there’s a pretty good chance you’ve encountered her work. Kathryn has contributed dance numbers and movement direction to five seasons of Key & Peele and to the hit Netflix series Wet Hot American Summer. She has worked on productions with the Upright Citizens Brigade, including their long-running Freak Dance stage and film musical. She’s also worked on Children’s Hospital and Another Period, and danced in a video for musical comedy legend “Weird Al” Yankovic.

Kathryn has acted in, choreographed for, and danced in national commercial campaigns. She worked with popstar Carly Rae Jepsen for appearances on Saturday Night Live and overseas tours. And, she was a choreographer for the Grammy-winning international megahit music video “Happy” by Pharrell Williams. Her body of work is incredibly extensive.

Kathryn is currently working on the critically acclaimed CW series, Crazy Ex Girlfriend. It’s a musical comedy about a successful but highly-neurotic New York attorney who abandons her career and moves to West Covina, California, in pursuit of a new life… and her ex-boyfriend from a high school summer camp. Crazy Ex Girlfriend stars series co-creator Rachel Bloom, who delivers a character that is equal parts hilarious and infuriating, and who’s search for love (from others and herself) is often misguided. The show’s humor is punctuated by impressive musical sequences that heighten the absurdity but also showcase an immensely talented cast and crew. And, as a show flying below the radar of mass audiences, Crazy Ex Girlfriend manages to be one of the most hilariously raunchy, explicit, subversive shows on network television. There’s nothing else out there like it.

The series has won a number of awards, including a Golden Globe and a couple of Emmys. One of which went to Kathryn, for her choreography routines on the songs “I’m So Good at Yoga”, “A Boy Band Made Up of Four Joshes”, and “Settle for Me”.

Crazy Ex Girlfriend just started its second season on the CW. You can watch new episodes on Friday nights at 9pmCST/8pmCST, or stream free full episodes on CWtv.com. You can binge watch the first season now on Netflix. And you can see all their musical sequences on YouTube. They’re amazing and so, so (delightfully) wrong.

We talk with Kathryn about her life and work as a dancer, comedienne, and choreographer. We discuss her history from live theater to music videos to episodic television, and the insane schedule of overlapping projects. She’s candid and hilarious, with an infectious enthusiasm that translates to her work.