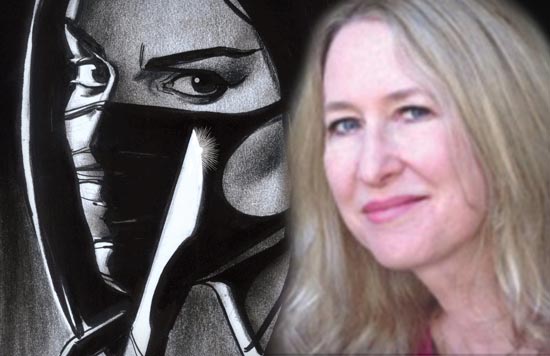 In this episode, Adron talks with legendary comics editor Karen Berger. Karen has worked in comics since 1979, spending almost 30 years of her career at DC Comics. While at DC, she helped create the pioneering publishing imprint, Vertigo. As executive editor of Vertigo, she discovered and nurtured an exceptional roster of new comics creators. Many of those talents have gone on to become luminaries of the field.

At DC, she edited Alan Moore’s classic run on Swamp Thing, as well as his dystopian series V for Vendetta. She brought Neil Gaiman into the fold, green-lighting and editing The Sandman. The series rocketed Gaiman into superstar creator status. Sandman became a huge hit in the then-nascent trade paperback / graphic novel market. It also expanded readership well beyond traditional comic book fans.

On the strength of Sandman and other successful titles, she then founded Vertigo in 1993. This established a mature-readers publishing arm of DC to tell unique stories. Vertigo publishes highly influential works like Preacher, 100 Bullets, Doom Patrol, Fables, The Invisibles, iZombie, Lucifer, Y: The Last Man, and many more. Karen’s work advanced the careers of significant creators like Garth Ennis, G. Willow Wilson, Mike Carey, and Grant Morrison, amplifying stories set well outside of the traditional superhero comics market.

Surgeon X and Life after Vertigo

Karen Berger exited Vertigo and DC Comics in 2013. Then, after a quiet three year hiatus, she re-emerged in April 2016 at the Image Comics Expo. Her appearance produced excitement from comics journalists and fans of creator-driven properties. Now a freelance editor, Karen announced that she’d be working on a new project called Surgeon X.

Surgeon X is written by documentarian and comic-newcomer Sara Kenney, with art by John Watkiss. In a near-future world, antibiotics are becoming ineffective and governments regulate their availability to patients. Minor infections and previously treatable diseases are now deadly. Hospitals are forced by the government to withhold services from patients who fall low on a Productivity Contribution Index.

Increasingly autocratic governing parties arbitrarily decide who is worthy of live-saving treatments. This provokes riots and violent counter-measures. So one doctor, sick of the restraints on the medical community, leaves her position at a hospital to pursue unregulated, underground surgery solutions. As the titular Surgeon X, she strugglesg against a corrupt system. And she battles her own growing god-complex, controlling who lives and who dies.

We talk with Karen about what attracted her to the Surgeon X project. We recount her time at Vertigo, ushering in the careers of so many legendary comic creators. And we discuss what it’s like working with Image Comics, another creator-driven company, but operating on a completely different business model.