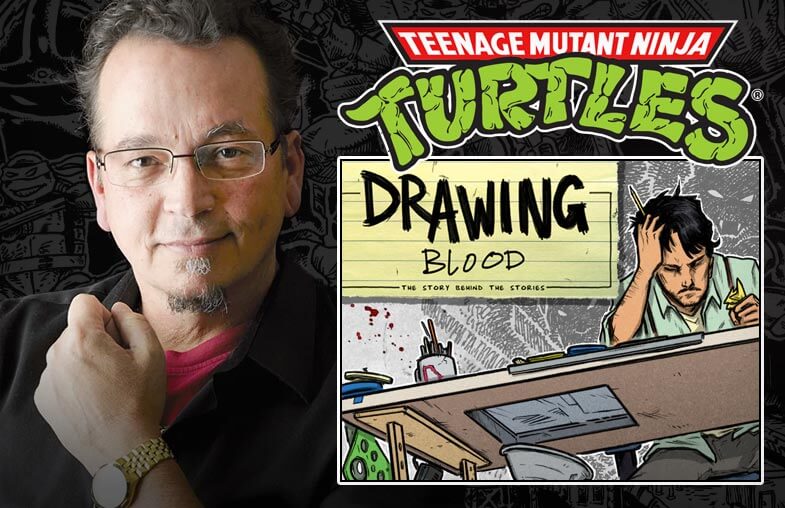 In this interview, our guest is Kevin Eastman, who should be well known to fans of comics, cartoons, movies, and toys as co-creator of the Teenage Mutant Ninja Turtles.

Kevin and TMNT co-creator Peter Laird introduced the lovable shelled quartet in a self-published comic magazine back in 1984 under their Mirage Studios imprint. As a fairly immediate breakout success, the Turtles made the jump to nationally distributed comics, then a hugely successful cartoon show supported by a popular toyline, then on to blockbuster films. Over the decades, the franchise has spawned several film iterations, animated adaptions, video games, and endless merchandising. (There was even a musical tour, but perhaps the less said about that the better.) After 30 years, the Turtles remain a beloved pop-culture phenomenon, continuing to delight fans of all ages.

But while Kevin still contributes to the TMNT brand, particularly with the comics from IDW Publishing, he also has a number of other ventures and comic properties, including the upcoming Drawing Blood, which he is crowdfunding via Kickstarter now.

Drawing Blood is a darkly-comedic drama about the twisted life of a professional cartoonist. The series follows Shane Bookman, a creator whose early runaway success and fortune have eroded under the pressures of wealth and reckless excess. Bookman’s life spirals into a rollercoaster of show biz and sex, controlled substances and uncontrolled artists, fame and infamy. The series explores the darkest corners of a mad world only talked about in the hotel bars of Comic Con, as Bookman tries to recover from his catastrophic career choices and survive his present encounters with murderous loan sharks.

Drawing Blood is co-created and scripted by David Avallone, with primary art by Ben Bishop, and some sequences and variant covers by Kevin.

The Kickstarter campaign went live on August 1st and runs until Thursday, August 31st, 2017. At the time of this episode’s release, the project is almost 70% funded. Click here to support Drawing Blood on Kickstarter.

You can find out more at Kevin’s website, KevinEastmanStudios.com.