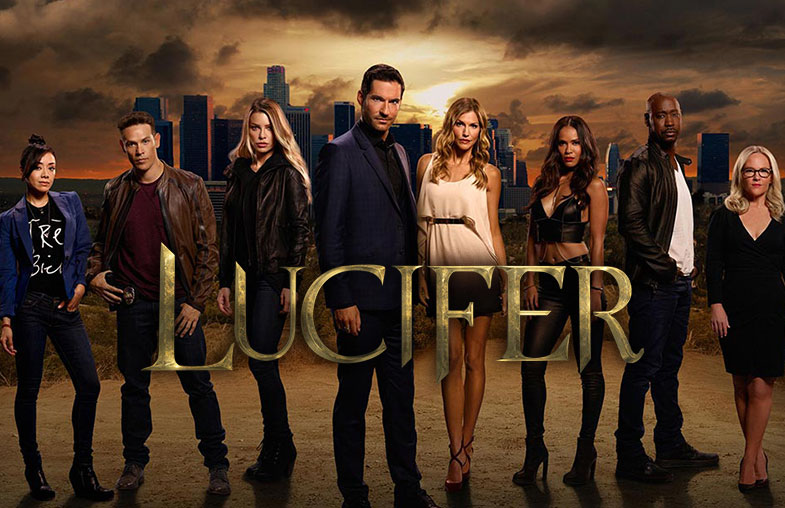 In this episode, you will find it very obvious that we’re excited to talk with Ildy Modrovich, co-showrunner of Lucifer, which is about to wrap it’s second season on Fox.

We here at Nerd For A Living HQ are BIG fans of Lucifer. The show is based on the Vertigo comics series by Mike Carey and Peter Gross, which originally spun out of the pages of Neil Gaiman’s Sandman. The TV series expands on a concept introduced in the Lucifer comics – of the Morningstar abandoning hell to live in modern day Los Angeles, running a bar called Lux alongside his demonic companion Mazikeen.

The show departs from the source material’s high fantasy mythology by grounding it as a police procedural, with the fallen angel assisting LA detectives – in his own unique, self-absorbed way – while combating supernatural conflicts and balancing a dysfunctional family of earth-bound celestials.

The beauty of the show, though, is how it blends procedural, mythological, and horror elements with a surprising amount of humor. Over two seasons, the writing staff, and everyone in the cast, have proven to have incredible ability at comedy. For what’s billed as a drama, Lucifer is consistently laugh out loud funny. The chemistry of the cast and the smart, often subversive screenwriting and direction makes it one of our favorite, can’t-miss TV shows.

Our guest, Ildy Modrovich, is Lucifer’s co-showrunner, alongside Joe Henderson, as well as a writer and executive producer. Some of her other notable writing and producing credits come from CSI: Miami, Californication, and Necessary Roughness.

Our talk about Lucifer delves into the themes, production process, and character evolutions on the show. Fans of it should enjoy our discussion of its humor, fantastic cast, and how much fun it is to create. We also discuss Ildy’s career path from musician to writer to producer.

Based upon the characters created by Neil Gaiman, Sam Kieth and Mike Dringenberg for Vertigo, from DC Entertainment, LUCIFER is the story of the original fallen angel. Bored and unhappy as the Lord of Hell, LUCIFER MORNINGSTAR (Tom Ellis) abandoned his throne and retired to Los Angeles, where he has teamed up with LAPD detective CHLOE DECKER (Lauren German) to take down criminals.

Charming, charismatic and devilishly handsome, Lucifer has a way of manipulating people into confessing their deepest, darkest secrets, which helps Chloe deliver justice. But Lucifer quickly discovered that Chloe makes him vulnerable. When he’s around her, the devil can bleed like anyone else. It’s a truly scary realization that doesn’t sit well with his best friend, MAZIKEEN aka MAZE (Lesley-Ann Brandt), a fierce demon in the form of a beautiful young woman. Maze wants nothing more than to leave Los Angeles and get back to her life in Hell, but Lucifer is having one helluva good time with the mortals, and she is not about to leave him behind.

At the end of Season One, Chloe watched Lucifer die, only to come back to life, causing more confusion over who he really is. Meanwhile, her estranged husband, DAN (Kevin Alejandro), who is also an LAPD detective, came clean about his involvement in a corrupt case – jeopardizing not only his job, but also their relationship.

In Season Two, Lucifer and his brother, AMENADIEL (DB Woodside), who have been sparring over Lucifer’s resistance to returning to the underworld, will now be brought back together for one common goal – to find their mother, CHARLOTTE (Tricia Helfer, “Battlestar Galactica”), who escaped Hell. After all, Lucifer doesn’t take after his dad, so the parent he does resemble is sure to be quite terrifying. Lucifer’s work with the LAPD also is upended when the police force hires ELLA LOPEZ (Aimee Garcia “The George Lopez Show”), a smart, tough forensic scientist whose mutual belief in both faith and science proves a point of interest to Lucifer.

With mom on the loose, DR. LINDA MARTIN (Rachael Harris), who has become not only a therapist, but also a confidante to Lucifer, will surely have a lot of advice to dole out. And, by the time she’s done with them, she may need a therapist of her own.