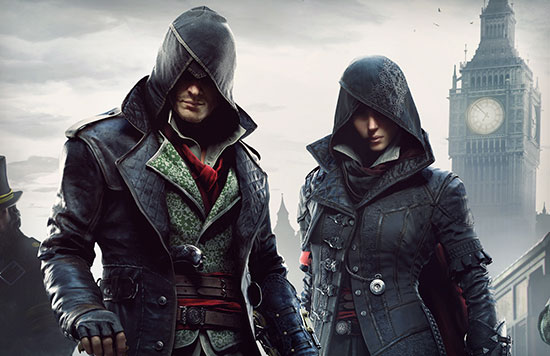 Putting music to moments is something most (if not all) of us do without even thinking about it – our lives and their stories have soundtracks. In creating music for games, a composer must help author these moments in the lives of characters we play – fully integrating their motivations, actions, and environment with the music. As we venture forth on a game’s journey, the music can tell us where we are, how to feel, what to think, who to trust, and more. This is one of the many reasons why creating the score for a game can be so challenging – and why it is critical to a game’s overall success.

Austin Wintory knows this challenge well, having scored over 2 dozen games – including the hugely successful, Kickstarter-funded game, The Banner Saga, and the acclaimed PS3 game, Journey. Austin has been composing since age 10 for multiple mediums, and his love of gaming and composition catapulted him to becoming the first ever Grammy-nominated video game composer for his work on Journey.

Austin’s most recent work, for the Ubisoft action/adventure game, Assassin’s Creed: Syndicate, captures the many moods and settings of the game. The score also incorporates folk music and hymns of the Victorian time period the game is set in, some of which are performed by in-game characters. The music weaves though the story in very intricate ways.

I asked Austin to share a bit about his experience composing for this game and others, and offer advice to others looking to create music for games. Interactivity makes games radically unlike all other media, and I usually seek to work as deeply as possible in that regard.

N4AL: How long have you been making music?

AW: I began music lessons as a kid, around age 10. I started on piano but almost immediately became interested in composing instead. From that moment on it’s been the dominant idea in my life. I wrote a lot in high school, got a composition degree and was able to happily plunge directly into my career after that.

N4AL: You’ve composed for a variety of mediums. Was there a project or particular event that led you to begin making music for games?

AW: I’ve always been a gamer, and so the idea of combining that with my passion for composing was inevitable. They were on a lifelong collision course! That said, what got me rolling was that during school, I met some fellow students who were developing games, and we began a collaboration. One of those was Jenova Chen, who later went on to co-found thatgamecompany, leading to my first commercially-released game score, flOw. My entire career in games spun out of that single project. N4AL: What are some of the challenges you deal with when composing music for games like Assassin’s Creed Syndicate? How do they differ from creating/composing for other media, such as film?

AW: The two most obvious challenges for ACS versus, say, a film, is that the game is deeply interactive in ways that films obviously are not, and also the scope of the score is larger than that of most films. I think 90 minutes is probably the longest film score I’ve yet written, whereas this was more than twice that at over three hours. But the first distinction is the most crucial. Interactivity makes games radically unlike all other media, and I usually seek to work as deeply as possible in that regard. I was delighted that Ubisoft, and particularly Music Supervisor Christian Pacaud, were as interested in pushing those boundaries as I was. The resulting score is pretty tightly reactive to the player, while still hopefully remaining musical.

(Young composers) should be a big walking, unapologetic neon sign of themselves. The world doesn’t need more generic artists who are happy coloring in the lines.

N4AL: Where did you find inspiration for your work on Assassin’s Creed Syndicate? And what excites you the most about your work on this particular game?

AW: I’ve become fond of calling the score “Neo-Mendelssohn” in nature, and by that I mean it’s very much a neo-Romantic score with heavy modern influences. I didn’t seek to expressly “represent” the Victorian era in my music, but the comparison is an easy one. The chamber music of the era was my leaping off point, and from there it was simply about trying to capture the characters themselves. Particularly the two leads, Jacob and Evie Frye, and the principal villain, Starrick. The entire thing was exciting and a huge joy. I got to collaborate with some dream musicians (most notably violinist Sandy Cameron, cellist Tina Guo, and soprano Holly Sedillos) and experiment on both musical and technical levels. Projects honestly don’t come much more gratifyingly than this one!

N4AL: You have the honor of being the composer of the first-ever Grammy-nominated video game score for Journey. Do you feel this has brought any increased awareness to game scores and composition – and the growing importance of gaming as a storytelling medium?

AW: It may have? I’m not sure. I certainly know quite a few members of the broader music industry who don’t really work in games at all, who were first introduced to the medium from Journey. But it’s hard to for me to gauge if or to what degree the nomination ‘impacted’ anything. I really am perfectly content just acknowledging how fortunate I was for that experience, and continuing to do my work and hoping that that is enough! N4AL: What is some advice you can offer composers and musicians interested in making music for games? Are there any particular programs or tools you’d recommend they become familiar with if just starting out?

AW: I think it’s very important that young musicians or composers, particularly students, learn to really aggressively embrace who they are. They should be a big walking, unapologetic neon sign of themselves. The world doesn’t need more generic artists who are happy coloring in the lines. But I recognize that when you’re first starting out, there has yet to be a market place for “you.” Your ideas, your voice, those things about your music that are definitively your own, have yet to establish value for themselves, so all of your instincts will be to write that which sells. That which will reliably land you a job. And I encourage all who are at the starting gate to fight that instinct. As I’m fond of saying, be so YOU that there can be no replacement.