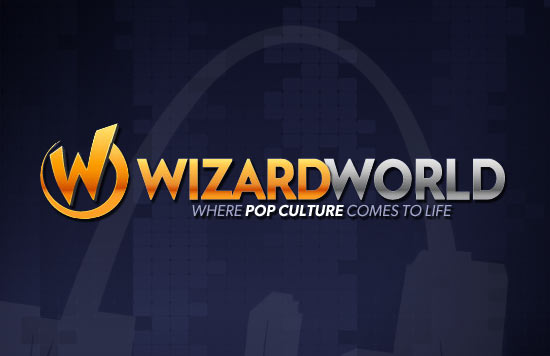 Wizard World is headed back to St. Louis, Missouri this May, and we are excited to announce that Nerd for a Living will be presenting a panel there on Saturday, May 23.

The St. Louis show runs Friday, May 22nd through Sunday, May 24th at the America’s Center. N4AL’s Wendy and Adron will be at the convention all three days, and will be presenting our speaker panel on Saturday afternoon at 12:30pm.

If you’ll be at the show, be sure to come to our panel, and hear from our talented guests speakers.

Working in a “nerd-related” industry is a dream for many, though it often seems unattainable. This panel of professional “Nerds for a Living” will share insights into how they got to where they are, and offer advice to those looking to break in. Attendees will get tips on how to create a path to the career they want from those already doing it. Panelists will discuss a variety of jobs that exist within animation, gaming, film, voice-over, comics and more. They will also provide advice to those looking to create their own “nerdy business.” Learn about types of training, mentorship opportunities, online and offline resources, and overall tactics to employ when trying to get a job in your dream industry. This panel will conclude with a 10-minute Q&A. Raised in North Canterbury and a descendant from Waikato/TAINUI in New Zealand, Warren Dion Smith has been affiliated with the team at Weta Workshop, a Five Time Oscar winning conceptual design & physical manufacturing Facility, for over a decade. During this time Warren has worked as a hair/makeup and special effects Artist on movies such as King Kong, The Hobbit, Elysium, The Amazing Spiderman 2, Man of Steel, and the remake of the 1960’s children’s classic Thunderbirds Are Go TV series.

Warren is also the NZARH 2014 Wellington Overall Senior Champion Hairdresser. Warren specializes in all aspects of hairdressing. He is also representing The Canterbury Association of registered Hairdressers and will continue to freelance for Film and TV, as well as Weta Workshop projects. After graduating, she co-founded St. Louis interactive studio The Rampant. Later, she discovered a real love for game development, so she and her Rampant teammates divided their studio efforts between interactive client work and game production (as Happy Badger Studio).

As a big part of a small independent studio, Carol does all sorts of creative work, including design, development, art, animation, voice acting, and writing. She’s worked on websites, mobile apps, comics, video games, card games, and a myriad of other creative projects.

Outside of work, Carol is the Chair of the St. Louis chapter of the International Game Developers Association (IGDA), supporting the local indie games community by organizing networking and educational events, giving talks, and participating in mentorship events.

Carol and Happy Badger Studio are currently in development on a quest-based hovercraft racing game, SmuggleCraft, set to release in early 2016 for PS4, PC, Mac, and Linux. Amanda Nuckolls, Founder and Chief Executive Gnome at GnomeAcres, has been making art using various mediums since the age of 3. She grew up in a family that owned an arts & crafts business and was often a regular contributor to the many products they offered.

In 2009, after spending 20 years around llamas and alpacas, she decided she would obtain her first llama, “Oh My Darling, Clementine”. The acquisition of Clementine, combined with her lifelong love of the agricultural world, playing outside and “making stuff”, helped to spark the idea of GnomeAcres. When GnomeAcres came to fruition in late 2009, Amanda saw it as an opportunity to pursue her true passions. Britta Buescher is a graphic & brand designer and rock poster artiste specializing in marketing for bands and businesses. She works as a freelance designer at The Outlet Epoch, and as an art and marketing director in retail services. She has produced client work for Dark Horse Comics, Nickelodeon, Imagine Dragons, Dropdead, Iron Reagan, Kylesa, and many more.

She currently lives in St. Louis, Missouri, with her modest record collection and a bull terrier named Chief, and listens to metal daily.