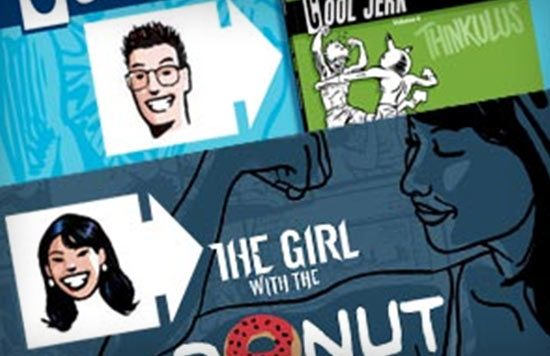 This week we talk with Paul Horn, writer/artist of the long-running webcomic Cool Jerk, and Darlene Horn, food blogger for My Burning Kitchen. Together, this couple also produced the illustrated food comic The Girl with the Donut Tattoo.

We talk about comics, blogging, self-publishing and selling online, the wonders and pitfalls of San Diego Comic Con, learning to be a “carnival barker” and much more. Darlene Horn is a newspaper designer who was laid off in February and is currently balancing several jobs as a freelance designer and writer. She’s been penning the blog My Burning Kitchen since 2005 which initially focused on her kitchen mishaps but now writes about anything food culture related. You can read two of her favorites here:

Why I would never have Dustin Hoffman make me french toast

Paul sometimes contributes to the blog and in 2012 co-created and self-published the comic The Girl with the Donut Tattoo, based on her food blogging adventures. Paul Horn is the creator of the newspaper comic strip Cool Jerk, an ongoing chronicle of things funny and worth satire told through the voices of his many characters.

Cool Jerk left newspapers in 1996 in favor of an online home and new stuff goes up most every week. There are four volumes of collected Cool Jerk comics, available at select comic shops, Amazon and via his website.

Horn also writes and draws the comic The Gore Score by Doc Splatter, an advice column of the supernatural. Horn is also an award-winning infographics journalist of nearly 25 years and is currently freelance.

Paul and Darlene were married in 2009, and currently live in San Diego with their black Lab/McNab mix dog, The Doctor (named after Doctor Who).