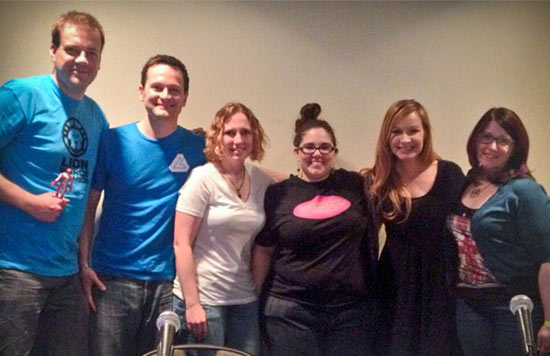 How to be a Nerd for a Living: Careers within Nerd Culture

Do you want to work in the industry you’re passionate about, but you’re not sure where you’d fit? This panel of professionals discusses different types of jobs that exist within pop-culture entertainment, gaming, film-making, writing and more. Get tips on finding a way to a new career from those already working in the industry.

Moderated by Nerd For A Living’s Wendy Buske, panel speakers include: Rachel Rieckenberg grew up in a small town in a household where pop culture and cult classic films were the norm. Art has always been a constant in her life and it wasn’t until her teen years that she realized making monsters was an actual job. She has been working in the film industry professionally for 8 years and also sells her art work under Sass and Slash Creations. Jeremy Corray is Vice President of Digital Entertainment at St. Louis-based Coolfire Studios. Jeremy is an enthusiastic advocate of digital entertainment and an online video addict who recently served as Creative Director at St. Louis-based World Events Productions, helping to guide the worldwide re-launch of the Voltron: Defender of the Universe franchise.

Serving as Supervising Producer on Nickelodeon’s Voltron Force, his own digital works have jumped from broadband to broadcast and been featured on FOX, Comedy Central, IFC, Spike and more. Amanda Nuckolls, Founder and Chief Executive Gnome at GnomeAcres, has been making art using various mediums since the age of 3. She grew up in a family that owned an arts & crafts business and was often a regular contributor to the many products they offered. In 2009, after spending the 20 years around llamas and alpacas, she decided she would obtain her first llama, “Oh My Darling, Clementine”. The acquisition of Clementine, combined with her lifelong love of the agricultural world, playing outside and “making stuff”, helped to spark the idea of GnomeAcres. When GnomeAcres came to fruition in late 2009/early 2010, Amanda saw it as an opportunity to pursue her true passions.

Listen to the N4AL podcast with Amanda Nuckolls. Matt Raithel is a game developer, entrepreneur and instructor. He has been credited on over thirty video games including titles for Disney, Warner Bros., Nickelodeon, and Hasbro. Matt is a charter member of St. Louis Chapter of the IGDA and was recently awarded an Innovation Award from the St. Louis Business Journal.

He is an instructor of Animation and Game Design at Maryville University in St. Louis and has lectured on topics such as violence in video games. He is a St. Louis native, where he leads the game development efforts of Graphite Lab as the Studio Director. Genese Davis is an author, host, columnist and media personality. She is the author of The Holder’s Dominion and the founder of The Gamer In You. Davis was recently awarded iGR Woman of the Year, and is a Publishers Weekly featured novelist. As an award-winning writer, model and moderator she appears internationally for entertainment and literary events.

Davis is a thought-leader in video game culture and its social development. Through her passion for the art community, she demonstrates how team-based video games like MMORPGs affect our lives and the new place video games have in fiction and other forms of media.