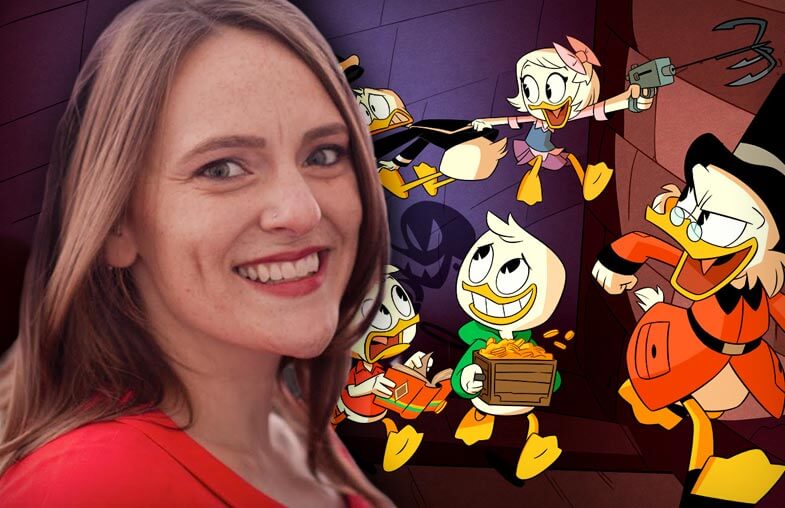 Rachel Vine is a Los Angeles-based freelance screenwriter with credits on 15 animated programs, including My Little Pony: Equestria Girls, Wander Over Yonder, Dawn of the Croods, and Doc McStuffins. She helped develop the Rainbow Brite 2014 reboot mini-series for Hallmark, writing all 3 episodes. And her most recently aired script was the season premiere of the new Disney XD relaunch of DuckTales.

If you were a kid in the late 80s / early 90s, you may remember the awesomeness that was the Disney Afternoon, a syndicated block of cartoons including Chip ’n Dale’s Rescue Rangers, TailSpin, and Darkwing Duck. And, of course, the fan favorite DuckTales. The original debuted in 1987, with one of animation’s all time great theme songs, and 100 episodes of adventure and hilarity.

Now, thirty years later, DuckTales is back, with a new look, an amazing voice cast, and a fresh take on that classic intro theme. The series debuted with a double episode in August, introducing Scrooge McDuck and his family of questing adventurers to a new generation. The debut is available to watch for free in its entirety on YouTube. It’s really fun, capturing the original show’s vibe while doing strong character overhauls on the triplets Huey, Dewey, and Louie, and their friend Webbigail, which adds tremendously to the personality and humor of the program.

Rachel was brought on to write the DuckTales proper premiere episode, officially kicking off the first season. And one of her key missions was to really develop the Webbigail character, from an adolescent, passive sidekick in the 1987 series, to an independent and daring hero in her own right.

We talk about her work on DuckTales, how she transitioned from an early career in feature films and television into animation with Rainbow Brite, the challenges of writing for shorter form programs and kids shows, and lots more.