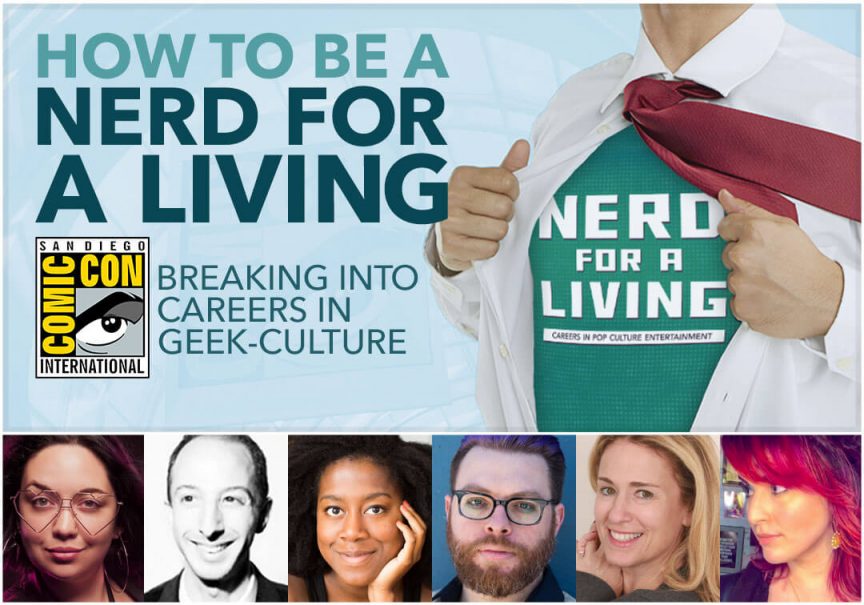 How to be a Nerd for a Living

Breaking into Careers in Geek-Culture

Do you want to build a career in the “nerdy” industry you love, but you’re not sure where to begin? This all-star panel of professional “Nerds for a Living” will share insights into a variety of careers within comics, literature, podcasting, animation, film, fashion and more during this discussion. Learn how our guests got their start, and get advice on what it takes to create a path to the career you want. Join moderator Wendy Buske (Nerd For A Living podcast) for this fun and informative discussion that’ll leave you ready to conquer your post-SDCC goals.

Add it to your official SDCC schedule using SCHED. Tomi Adeyemi is a Nigerian-American writer and creative writing coach based in San Diego. After graduating Harvard University with an honors degree in English literature, she received a fellowship that allowed her to study West African mythology and culture in Salvador, Brazil. When she’s not working on her novels or watching Scandal, she can be found blogging and teaching creative writing to her subscribers at tomiadeyemi.com. Her website has been named one of the 101 best websites for writers by Writer’s Digest. Her debut West African YA Fantasy novel is Children of Blood and Bone (Holt Books for Young Readers/Macmillan). The movie adaption is in development at Fox 2000/Temple Hill Productions with Karen Rosenfelt and Marty Bowen (Twilight, Maze Runner, The Fault In Our Stars) producing it. Ben Acker is the co-creator — with writing partner Ben Acker — of The Thrilling Adventure Hour, a staged show in the style of old-time radio, which is also a podcast on the Nerdist network. He has written for CW’s Supernatural, Dreamworks/Netflix’s The Adventures of Puss in Boots, and FX’s Cassius and Clay. With Acker, he has developed original pilots for Fox, USA, Spike, Paramount, Nickelodeon, and others. He has written comics for Marvel, Dynamite, and Boom!, and is writing the upcoming Vertigo series Hex Wives. Blacker is the creator and host of The Writers Panel, a podcast about the business and process of writing. He’s the producer of Dead Pilots Society, a podcast in which unproduced television pilots by established writers are given the table reads they so richly deserve. Jaimie Cordero is the CEO / Artistic Director of Espionage Cosmetics, an all nerd, woman-owned business based in Tacoma, Washington, creating make-up for nerds, by nerds. Founded in 2011, the company has seen enormous growth in the niche nerd market. Espionage Cosmetics has expanded from a living-room operation to a Tacoma-based studio space with 8 full-time employees, several part-timers and an army of interns. Bi-monthly product launches and fully produced ad campaigns pour out of the studio manned by a full-time wardrobe master/cosplay expert, an interns and conventions coordinator, and Jaimie. Her business card says Glitter Jedi. Susan Eisenberg is a professional voice-over artist known for her animation and commercial work. Her breakout role was that of Wonder Woman, aka Princess Diana, in the acclaimed Justice League and Justice League Unlimited television series. She has continued to portray Wonder Woman in films and games, including Justice League: Doom, Superman / Batman: Apocalypse, Injustice: Gods Among Us, Injustice 2, and DC Universe Online. Her animation voiceover credits also include Jackie Chan Adventures, The Super Hero Squad, and Avatar: The Last Airbender. Her work in video games includes Star Wars: The Force Unleashed, Destiny, Elder Scrolls V: Skyrim, and Mass Effect 3. In 2018, she joins the DC LEGO universe as Mera, queen of the seas, in the animated LEGO Aquaman: Rage of Atlantis. Travis attended the University of Oklahoma where he received his BFA in acting. After graduating, he worked as the Technical Director at the Cincinnati Shakespeare Company. At the same time, he and his brothers Justin and Griffin began recording the comedic advice podcast My Brother, My Brother and Me. MBMBaM was well received and was soon added to the MaximumFun.org network. Travis’s theatre career and podcasting career ran concurrently for several years during which Travis also appeared on stage in several CSC shows, married his wife Teresa and started his second podcast (In Case of Emergency) and third podcast (The Adventure Zone). In 2014, they moved to Los Angeles where Travis started the podcasts Bunker Buddies, Can I Pet Your Dog, Trends Like These, InterroBang with Travis and Tybee, Til Death Do Us Blart, and Shmanners (with Teresa). During this time, he (along with his brothers) began pre-production on the MBMBaM TV show and production started on The Adventure Zone graphic novel adaptation. Now back in Cincinnati, Travis continues to produce MBMBaM, Adventure Zone, Shmanners, TLT, InterroBang and TDDUB. Jazzlyn Stone is the COO of Bombsheller, which creates Badass Leggings, printed on demand, featuring many favorite nerdy fandoms and themes. She is also the CoEditor of Make Space Zine, and a photographer living and working Seattle, WA. Photo by Stephen Klise (@StephenKlise). Wendy Buske is the producer and PR director at Nerd For A Living, which she co-founded in 2013 as a way to help people discover new career possibilities in pop-culture. Wendy has been organizing events and speaking at conventions around the country for over 7 years, and was recently selected to be a storytelling “fellow” for the sixth season of Campfire. Wendy is also Senior Digital Producer & Content Marketing Lead at award-winning advertising agency, Rodgers Townsend/DDB – and has nearly a decade of agency experience in digital media, advertising & marketing for brands of all sizes.