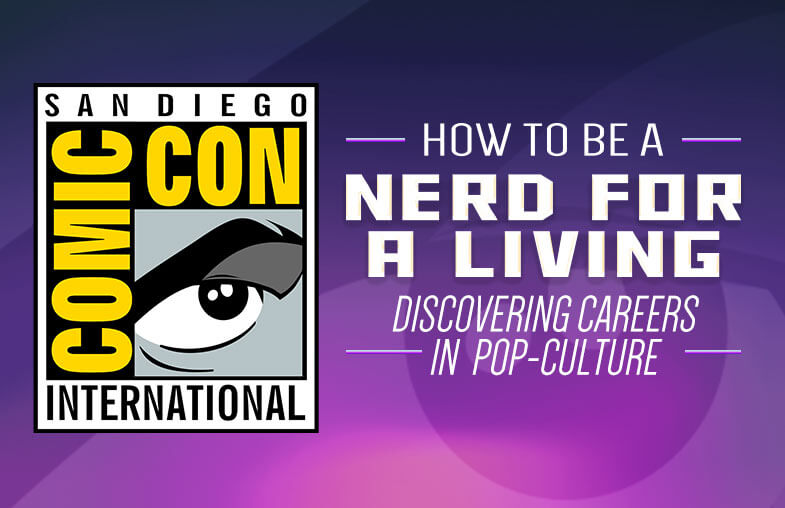 Nerd For A Living programming returns to Comic-Con International 2019

We’re excited to be heading back to San Diego for our sixth year of doing programming at Comic-Con International!

SDCC is always one of the most exciting events of the year, and we’re thrilled to share the stages there once again with a fantastic group of professional nerds. Wendy Buske will moderate our signature “How to be a Nerd For A Living” panel, while Adron Buske will have two Fictitious panels. (More info for those on FictitiousPodcast.com.)

How to be a Nerd for a Living:
Discovering Careers in Pop-Culture

Do you want to build a career in the “geeky” industry you love, but you’re not sure where to begin? This panel of professional “Nerds for a Living” will share advice and insights into a variety of careers that exist within comics, gaming, publishing, podcasting, and more. From entrepreneurial endeavors to working for some of the biggest brands in fandom, learn how our guests got their start – and get actionable advice on what it takes to create a path to the career you want. Moderated by Nerd For A Living co-founder, Wendy Buske, and featuring guest speakers:

Add this panel to your official SDCC Schedule via Shed.

Sarah Kuhn is the author of the Heroine Complex series. The first two books were 2016 and 2017 RT Reviewers’ Choice Award nominees for Best Urban Fantasy. Additionally, the first book is a Locus bestseller and one of the Barnes & Noble Sci-Fi & Fantasy Blog’s Best Books of 2016. Other projects include the Japan-set YA romantic comedy I Love You So Mochi and a Batgirl graphic novel for DC Comics. In 2018, she was a finalist for the John W. Campbell Award. (Photo Credit: CapozKnows Photography)

Annalee Newitz writes science fiction and nonfiction. They are the author of the novel Autonomous, nominated for the Nebula and Locus Awards, and winner of the Lambda Literary Award. As a science journalist, they’ve written for the New York Times,Washington Post, Slate, Ars Technica, the New Yorker, and The Atlantic, among others. They are also the co-host of the podcast Our Opinions Are Correct. They were the founder of io9, and served as the editor-in-chief of Gizmodo. Their new novel, The Future of Another Timeline, comes out September 2019. (Photo Credit: Sarah Deragon)

Steenz is a St. Louis based cartoonist and editor. She is the co-creator of Dwayne McDuffie Award winning Archival Quality from Oni Press and is featured in several short story anthologies such as the Eisner Award Winning Elements: Fire and Mine!. Steenz has created and run comics related programming from her time as a comic shop manager and a comics-focused librarian.

Jazzlyn Stone is a comics marketing consultant, and the former COO of clothing company Bombsheller. She is also the CoEditor of Make Space Zine, and a photographer living and working Seattle, WA. (Photo credit: Stephen Klise)

Jen is the narrative designer at Seattle-based video game company, Very Very Spaceship. When she’s on space walks outside of work, Jen writes D&D adventures for the DMs Guild in addition to writing and drawing comics like Teenage Wasteland (written by Mags Visaggio), Goosebumps: Download and Die and more. You can hear Jen play D&D as Riot Bonezerker (tiefling ranger) with her best buds on d20 Dames, a family-friendly all-women podcast.

Robyn Warren, M.S. Ed. is the founder of Geek Girl Strong, a wellness community for those who want a non-traditional and wholistic coaching experience. Robyn’s clients and group classes include people who are beginning their wellness journey or are just in need of a supportive boost, and have a common interest in all things geeky!

Wendy Buske is the Producer and Marketing Director for Nerd For A Living, which she co-founded in 2013 as a way to help people discover new career possibilities in pop-culture. Wendy has been organizing events and speaking at pop culture conventions around the country for over 7 years, and was recently selected to be a storytelling “fellow” for the sixth season of Campfire. Wendy is also Senior Producer & Content Marketing Lead at award-winning advertising agency, Rodgers Townsend/DDB – and has over a decade of agency experience in digital media, social advertising & marketing for brands of all sizes. She has been sorted repeatedly into Gryffindor, but knows deep down she’s at least 40% Hufflepuff.