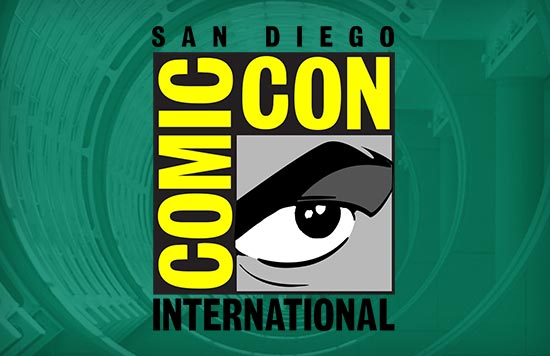 Nerd For A Living Returns to San Diego Comic-Con

San Diego Comic-Con International 2016 is coming July 20th-24th. Nerd For A Living returns to SDCC with an exhibitor table, and an exciting speaker panel. For the third year in a row, we will be joining the Dial R Studios gang at Booth 2103. On the Comic-Con map, you’ll find that booth just inside the Lobby B2 doors. We’re in the “IP Pavilion” area, marked in pink on the map, just down the aisle from the big DC Comics display. Adron and Wendy will be hanging out periodically at the booth, so come chat with us. You can always tweet at us at @NerdForALiving to let us know when you’re dropping by.

And, on Thursday evening, don’t miss our awesome speaker panel! Death & the High Cost of Resurrection

They call it a “Comic Book Death” when a major fictional character is killed off, but the audience doesn’t believe they will stay dead. Does it damage stories when their heroes and villains refuse to remain in the grave? How emotionally invested can an audience be when big consequences are easily reversed? A speaker panel of comic creators, novelists, screenwriters, and filmmakers discuss the ramifications of resurrection with moderator Adron Buske (host of the Nerd for a Living podcast). Speakers include:

Add this panel to your SDCC Schedule using their official Sched system. Seanan McGuire – aka Mira Grant – was born and raised in Northern California, where she has made a lifelong study of horror movies, horrible viruses, and the inevitable threat of the living dead. In college, she was voted Most Likely to Summon Something Horrible in the Cornfield, and was a founding member of the Horror Movie Sleep-Away Survival Camp, where her record for time survived in the “Swamp Cannibals” scenario remains unchallenged.

Currently, Mira lives in a crumbling farmhouse with an assortment of cats, horror movies, comics, and books about horrible diseases. When not writing, she splits her time between travel, auditing college virology courses, and watching more horror movies than is strictly good for you. Favorite vacation spots include Seattle, London, and a large haunted corn maze just outside of Huntsville, Alabama.

In her guise as mild-mannered urban fantasy author Seanan McGuire, Mira was the recipient of the 2010 John W. Campbell Award for Best New Writer. All three Newsflesh novels have been nominated for Hugo Awards, as has Countdown, the first novella in the Newsflesh universe, and Parasite, the first novel of the Parasitology series. Anthony C. Ferrante is a director and writer, known for the immensely popular Sharknado television film franchise on the SyFy channel, and for the film Boo (2005).

Sharknado 4: The 4th Awakens debuts on this July. Five years after the East Coast was ravaged in ‘Sharknado 3,’ Fin (Ian Ziering) and his family have been blissfully sharknado-free, but now sharks – and ‘nados – are being whipped up in places (and ways) that are completely unexpected. Plus – Cow-nados! Chainsaws! And April Lives! Watch it on SyFy, July 31st. Hugo-award winning author, Mary Robinette Kowal is a novelist and professional puppeteer. Her debut novel Shades of Milk and Honey (Tor 2010) was nominated for the 2010 Nebula Award for Best Novel. In 2008 she won the Campbell Award for Best New Writer, while two of her short fiction works have been nominated for the Hugo Award for Best Short Story: “Evil Robot Monkey” in 2009 and “For Want of a Nail” in 2011, which won the Hugo that year. Her stories have appeared in Strange Horizons, Asimov’s, and several Year’s Best anthologies, as well as in her collection Scenting the Dark and Other Stories from Subterranean Press.

Kowal is also an award-winning puppeteer. When she isn’t writing or puppeteering, Kowal brings her speech and theater background to her work as a voice actor. As the voice behind several audio books and short stories, she has recorded fiction for authors such as Kage Baker, Cory Doctorow and John Scalzi. She likes to describe voice acting as “puppetry, without the pain.”

Mary lives in Chicago with her husband Rob and over a dozen manual typewriters. Sometimes she even writes on them. Paul Cornell is a writer of science fiction and fantasy in prose, comics and TV, one of only two people to be Hugo Award-nominated for all three media. He’s written Doctor Who for the BBC, Action Comics for DC, and Wolverine for Marvel. He’s won the BSFA Award for his short fiction, an Eagle Award for his comics, and shares in a Writer’s Guild Award for his television.

His latest urban fantasy novel is Who Killed Sherlock Holmes? from Tor. He lives in Gloucestershire with his wife and son.