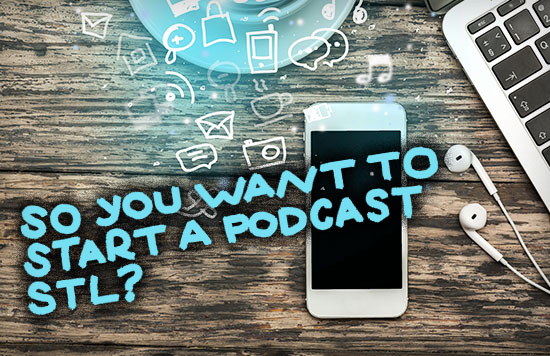 So You Want to Start a Podcast, STL?

This past Thursday, June 9th, we had the pleasure of participating in the “So You Want to Start a Podcast, STL?” event. Hosted by St. Louis Public Radio, and produced by the show St. Louis On The Air, the live broadcast event featured Nerd For A Living’s Wendy Buske and Adron Buske with other area podcast personalities. Our fellow speakers were Kameel Stanley (producer & co-host, We Live Here), Dustin Bryson (creator, Saint City Dreamers), and Alex Ihnen (creator, Future Great City).

Presented before a “sold out” live studio audience, the discussion was led by St. Louis radio legend Don Marsh.

The St. Louis Public Radio website provides a terrific recap of the event, including quotes from panel speakers. They’ve also provided a ton of great resources for people interested in getting into podcasting.

Big thanks to St. Louis On The Air and producer Kelly Moffitt for including us in this fantastic event. The audience turnout and interaction was great, with excellent questions during the Q&A. We spent another hour after the panel continuing the conversation with audience members and other area podcasters. It was wonderful to see so much engagement, and excitement for the podcasting medium.

The audience shared many great moments and photos on Twitter as well. A few of them are below.

Had an absolute blast at the @STLonAir podcasting event tonight! Special thanks to @kmariemoffitt for inviting us! pic.twitter.com/vdHqmOfJiJ

GREAT TO HAVE @STLonAir their arena and audience with we Podcasters! Cant wait to interact with we met! Thank yoU! pic.twitter.com/vc8tqg8o81

Yes! @NerdForALiving is so right. Serial was the "gateway podcast" for so many. My career is indirectly because of @serial! #STLPodcast

It was a good night. Extra thanks to our knowledgable #stlpodcast panel. ??? pic.twitter.com/cWlGWKiENw