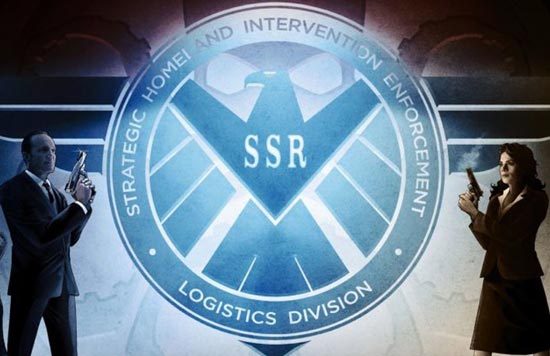 Nerd HQ 2015: A Conversation with Marvel: Partners in Prime Time

During San Diego Comic-Con 2015, Nerd HQ – the ever-popular offsite event run by The Nerd Machine and it’s co-founder, Zachary Levi – hosted a Conversation for a Cause with our two favorite agents. Along with these heroes of the MCU and MCTVU, they brought Chloe Bennett (Skye/Daisy/Quake from Agents of S.H.I.E.L.D.) and Mr. Jarvis himself, James Darcy (Agent Carter).

From the perspective of a fan, getting to be at this intimate 35-minute chat with moderator, Aisha Tyler, was everything I could have wanted. All four of these actors could not have been more charming, funny, and engaged with each other and the fans. From Clark Gregg’s giddiness at sharing on-set pranks (4:58 of the panel video above – it’s really too good not to watch), to Dubsmash Wars, it was often a hilarious and not just a little bit wrong.

However, from a professional perspective, I couldn’t help but take away some valuable perspective on doing what you love from these actors. And what the Marvel universe has given them. 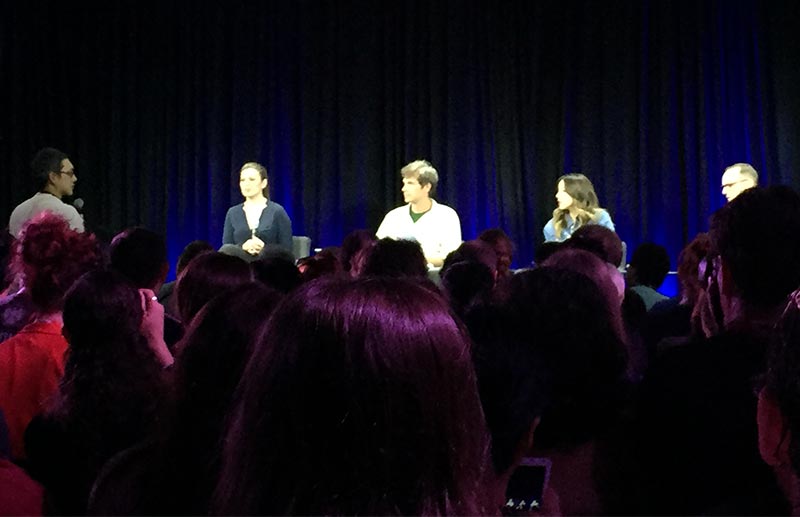 The Stronger the Team, the Happier the Agent

In the special cases when you’re lucky enough to not only do what you love, but work with people you like – you win. Game over. And these stars know they have something special.

They may prank, rib, and generally talk smack on each other, but the immense respect they have for each other is obvious and, frankly, enviable. So often in any industry (the entertainment industry in particular), there is blatant lip-service and forced smiles when discussing colleagues and bosses. It’s certainly not wise to burn bridges and publicly spew negative comments about those you are working with – so I can’t condemn anyone for “grin and bear-ing” it.

However, if these talented folks are “faking” it, they’re better actors than even I give them credit for. They are relentlessly open with their praise of each other and good fortune for being a part of their respective shows. If nothing else, just seeing the pure admiration that Chloe Bennett has for Clark Gregg warms the sometimes cynical cockles of my heart.

This is something we should all not just hope for, but strive for. Healthy, supportive, and fulfilling relationships with co-workers can make even the worst or work days seem worthwhile. 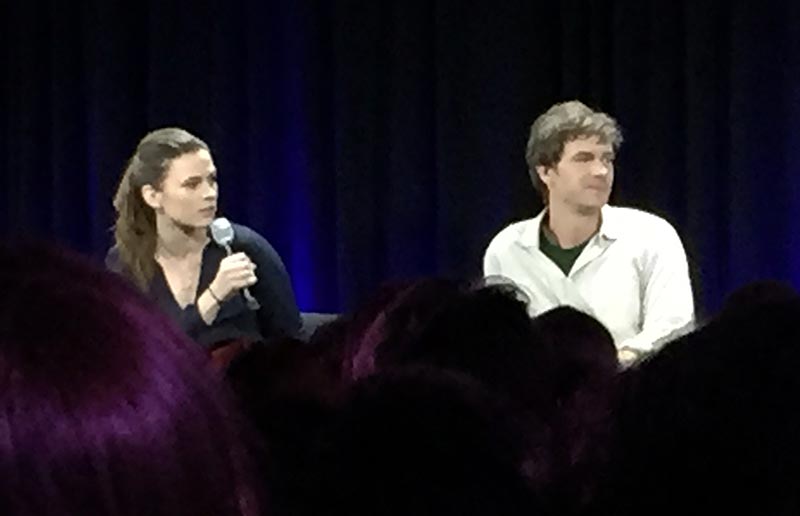 Be Humble. Be Grateful.

“Can you write on the photograph, that ‘Women can be heroes, too?'”
– a fan to Hayley Atwell

When a fan rose to speak about her gratitude for the panelists and, specifically, Agent Cater, Hayley Atwell shared several moving stories of female fans she’s met at conventions recently. One disabled woman came to her with a photograph of Hayley as Agent Carter, asking her only to write, “Women can be heroes, too.” Another wheelchair-bound woman asked Hayley to sign her leg. This woman returned the next day to show her that the signature was now a tattoo – one of many she had that make her feel like she is “reclaiming her broken body” with the strength of powerful women.

All four of the stars expressed nothing but gratitude, but it was obvious that little could prepare Atwell for the gravity of those kind of moments. Agent Carter is, simply, a new Marvel icon. She’s the superhero every girl wants – because she’s human just like us. Hayley knows how important that is to her fans, and returns the love they share in spades.

In positions like these stars are in, everything from unabashed adoration to vitriolic hate is sent their way. They have to walk fine lines of what they can and should say based on contractual obligations to studios. It’s not always as easy as it may appear to revel in the glow of Comic-Con fans – but these pros know that, above all, they are fortunate to have the fans they do. And, sometimes, just the right word(s) at the right time from them can brighten the spirit of a fan who really may need it. That’s a superpower. 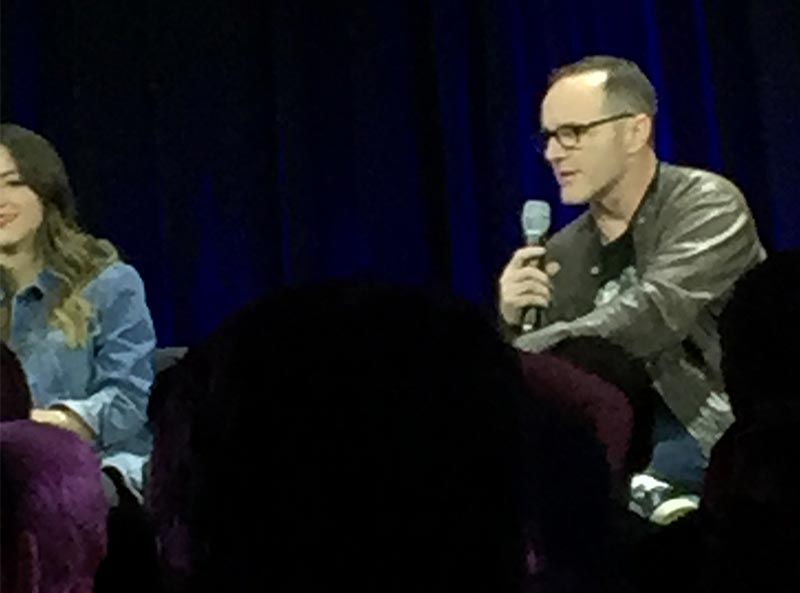 “We have a guy named Mark Kolpack… I don’t believe anybody has done this amount of visual effects in this amount of time.”
– Clark Gregg, speaking of the Visual Effects Supervisor for Agents of S.H.I.E.L.D.

It takes a village – or at least a small army – to create the worlds we love. For every moment we see of Skye evolving into Daisy/Quake, there’s VFX Supervisor Mark Kolpack behind the camera spending endless hours with his team making sure it looks perfect. There’s costume designer Ann Foley making sure that every agent looks as much like a badass as we imagine they should.

Both at this panel and online, the love and credit for everything that is great about these shows is generously spread by these actors. Clark Gregg’s shout-out during the panel to Kolpack specifically was wonderful to see – in large part due to the fact that, upon Gregg saying his name, the crowd cheered. Gregg’s glowing response said it all, “It makes me so happy that you know who that is!”

Overall, this conversation with Marvel’s elite at Nerd HQ demonstrated that these actors represent more than just their characters. They represent having character and humility in an industry often thought to be without much of either. 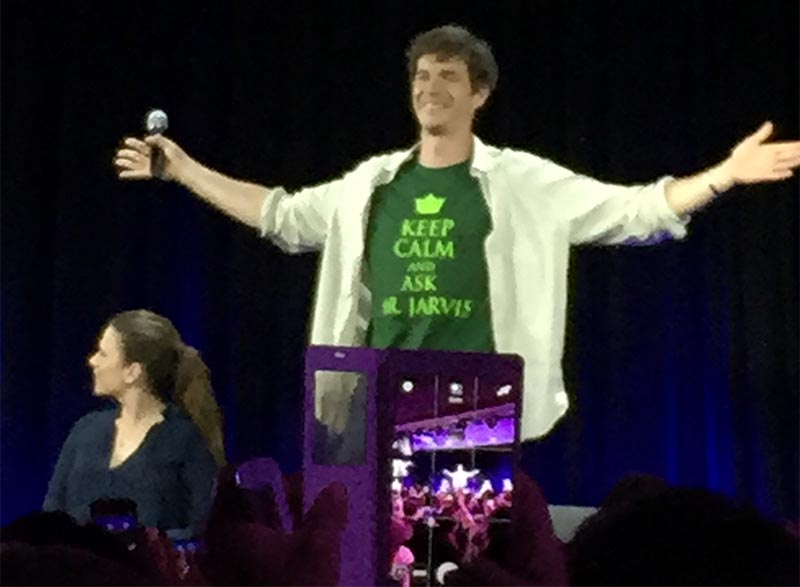 Nerd For A Living co-founder Wendy Buske is our marketing director and podcast co-host. She is also our primary speaker panel moderator at conventions and events. Wendy is a digital producer at award-winning advertising agency, Rodgers Townsend. She has over 8 years of agency experience in digital media, advertising and marketing. Her specialties include digital marketing strategy with a focus on branding, website usability, email marketing, social media, content SEO, copywriting, public relations and relationship management, and event coordination.